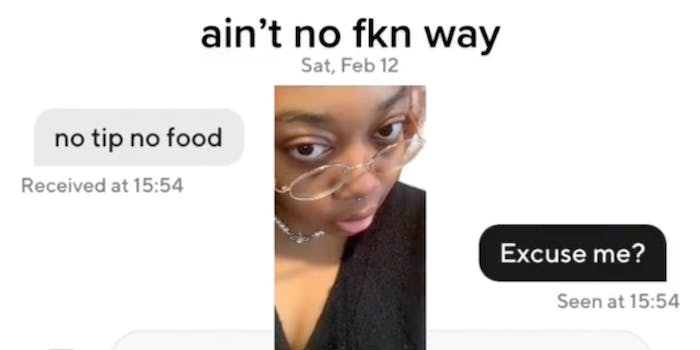 'I always make it a point tip my drivers, but due to past experiences, I now tip after.'

TikTok erupted into heated debate when one user was allegedly told “no tip no food” by her DoorDash driver. Tipping etiquette on DoorDash has become a hot topic on TikTok lately, and the video, which has garnered over 150,000 views, has inspired divisive discourse.

In the post, Jordan Gray (@dabimethazine) posted a screenshot of her messages with a DoorDash driver. Gray told the Daily Dot she has a personal policy when it comes to tipping.

“I always make it a point tip my drivers but due to past experiences, I now tip after. I’ve been called a bitch before, people have yelled at me on the phone, so that’s why I really just started tipping w cash or cashapp after I receive my food,” she said.

The driver allegedly still accepted the order knowing it had no initial tip, but then messaged Gray saying, “no tip no food.”

Gray replied, “Excuse me?” and then recorded her stunned reaction in the video.

this is why I always tip AFTER BC WTF

Some agreed with Gray’s policy of tipping after the delivery.

@aromzus said, “deciding the tip before the service is performed is so backwards.”

@maddielawson commented, “DD needs to put the tips after bc there’s been so many times where I’ve tipped good and their service has been horrible and I wish I didn’t…”

Many users agreed the driver could have chosen not to take the order.

“Y’all better not defend this at all. that lady knew she wasn’t getting a tip before she accepted the order so she did all that out of spite,” stated @1018.ev.

“Idk why they even took the order if they saw it was no tip, they could have just rejected it and did a diff order instead of wasting both y’all’s time,” said @.mixyy.

Others though took the Doordash drivers side, saying there should have been a tip.

@barbtroll21 commented, “Lollll I’m on the drivers side!”

“Honestly that’s why i tip before. it’s easy and they should get tipped regardless,” said @gxthsinn

@ethereal.moons offered one possible solution: “you can change the tip after the food is delivered if the service isn’t good. so I always start with a base tip and adjust based on that!”

Gray said she’s been taken aback by the reactions—and has unfortunately received racist messages over her post.

“I posted it bc it was a funny moment I didn’t know it would turn into an actual discourse,” she told the Daily Dot.

As far as the original order, she was able to switch her driver using the help feature on DoorDash.

A spokesperson for DoorDash confirmed to the Daily Dot they are looking into the incident.

This post has been updated with a statement from DoorDash.