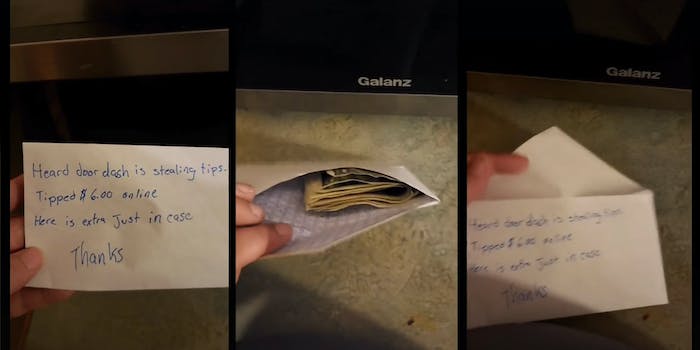 ‘As a dasher, this warms my heart’: Customer leaves cash tip for apparent DoorDash driver with viral note

A TikTok user filmed themselves leaving a cash tip for her delivery driver over concerns that DoorDash wasn’t properly compensating its workers.

The video was applauded by other alleged delivery drivers on TikTok who expressed frustration over working in the gig economy.

“As a dasher this warms my heart,” a user named Cait wrote. “Between doordash itself and none tippers it’s hard out here.”

“A lot of people are not tipping anyone any longer,” another alleged driver said. “I work to-go orders and it’s getting hard to live off of. 10 an hour and no tips, being murdered.”

The TikToker’s concerns aren’t entirely unfounded. In November of last year, DoorDash was ordered to pay $2.5 million as part of a government lawsuit that accused the company of stealing drivers’ tips. Not only that, customers were allegedly tricked into believing that the tips would go to the drivers as well.

Others workers in the comments bemoaned the fact that many customers now fail to tip either on the app or in person. Some suggested that current economic hardships brought on by the pandemic could be to blame.

The TikTok video is just one of many that have led to widespread debate over the treatment of gig workers.

An apparent GrubHub worker caught the internet’s attention this week also after being seen delivering food through the flooded streets of New York City.