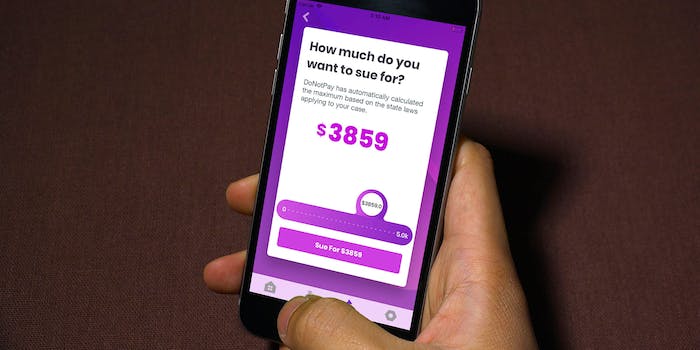 DoNotPay now lets you sue, straight from its app

DoNotPay began as a chatbot that could give you legal advice when you were issued a parking ticket. After expanding into a general source of legal advice in the U.S., it’s now stepped into the big leagues with an iOS app. The new DoNotPay app acts as a “robot lawyer,” letting you “sue anyone by pressing a button.”

However, its aim isn’t so much in empowering you to sue your neighbor, but rather press charges against wrongful corporations and navigate the labyrinthine bureaucracies that go along with that. (One example the service has already done in this realm is letting users quickly sue Equifax following news of its data breach last year.)

The app, which is powered by IBM Watson’s AI technology, works by asking questions about your situation and the entity you want to sue. With that information, it fills out official documents you can then send to a courthouse as a plaintiff. If you end up needing to attend court in person, it’ll also draw up a script you can read.

According to Motherboard, DoNotPay has had success in court. “In its beta testing phase, which included releases in the U.K. and in select numbers across all 50 U.S. states, Do Not Pay has helped its users get back $16 million in disputed parking tickets.” Founder Joshua Browder said that DoNotPay has a roughly 50 percent success rate, with successful cases averaging $7,000 in awards.

The app’s reviews are currently mixed, with a near equal number of five-star ratings praising its greatness, and one-star ratings saying it doesn’t work.