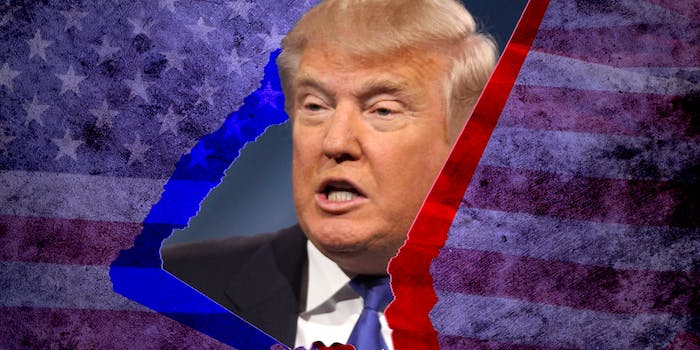 The Donald isn't only winning in the polls anymore.

After a touchy loss to Sen. Ted Cruz (R-Texas) in the Iowa caucuses, Donald Trump has just won his first primary election.

With just 6 percent of districts reporting in New Hampshire’s Republican primary race, Trump is 16 points of his nearest Republican opponent with 33.5 percent of the votes. Ohio Gov. John Kasich holds second-place with 16 percent.

Save his loss in Iowa, Trump has dominated the Republican field since the start of his campaign—despite, or perhaps because of, his frequent brash remarks. As the polls suggest, and as the New Hampshire vote goes to show, the real estate mogul’s nontraditional campaign has struck a chord with American conservatives, many of whom say the current leadership has “weakened” the country.

The reaction at the Trump party when CNN said he won pic.twitter.com/Kc5CVVxVpx

Trump offers no apologies for his unfiltered rhetoric. At his campaign kickoff speech on June 16, he insisted that most undocumented Mexican immigrants in the U.S. are drug-peddling “rapists.” He cracked jokes about the genitals of a transgender beauty-pageant contestant. Last fall, he implied primary opponent Carly Fiorina would not receive the GOP’s nomination because of her looks.

A day before the New Hampshire primaries, Trump’s made headlines again after he effectively called Cruz a “pussy.” The comment was allegedly shouted by one of his supporters before Trump repeated it into his microphone: “She said, ‘He’s a pussy.’”

Google tracking reveals that Trump has remained the most searched Republican candidate since the launch of his campaign. The top issue for 2016, according to Google Trends, is immigration, and two-thirds of Republican voters favor Trump’s suggestion to ban all Muslims from entering the United States, according to a Rasmussen survey published last month.

Democrats will caucus in Nevada on Saturday, Feb. 20, the same night Republicans vote for a nominee in South Carolina’s “first-in-the-South” primary.