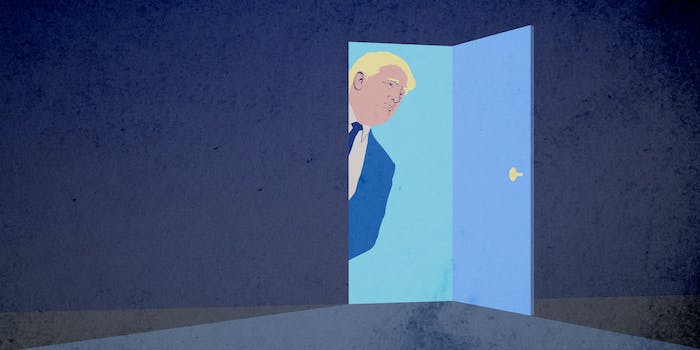 Is Donald Trump just screwing with us?

Is Donald Trump just screwing with us?

During an interview with the New York Times, published on Thursday, Trump refused to rule out the possibility that he might not serve as president even if he beats his Democratic challenger, Hillary Clinton.

“I’ll let you know how I feel about it after it happens,” Trump said.

As the Times notes, it’s possible that Trump is simply “playing coy to earn more news coverage,” which, if true, well—touché, Mr. Trump.

But there are plenty of theories swirling around the internet about what Trump’s ultimate end goal is in running for the White House.

One theory is that Trump is actually a Clinton plant whose absurdist campaign is meant to drive voters to the presumptive Democratic nominee.

Another is that Trump is simply playing a long-game con to promote a new business. Last month, Vanity Fair reported that Trump is considering the launch of a “mini-media conglomerate” to compete with the likes of Fox News, MSNBC, and CNN. This theory congeals with Trump’s regular promotion of his products and properties (and gleeful attacks on those existing brands) while on the campaign trail.

Other still believe Trump may have started his presidential campaign with business ambitions but is now simply in over his head. Former Mitt Romney senior advisor and avid Trump critic Stuart Stevens told the Times that he believes Trump is “a con man who is shocked his con hasn’t been called.”

“He has no sense of how to govern,” Stevens added. “He can’t even put together a campaign.”

Were Trump to refuse to serve as president after winning the general election, the 538 electors of the Electoral College would then have the opportunity to vote for an alternative candidate. The majority of electors are Republican, but they would have to give one candidate a majority for that person to win—which is not a sure bet. Further, the vote would have to take place before Dec. 19, when they official cast their ballots.

Of course, this scenario has never happened—and it likely won’t.

Roger Stone, a Trump policy advisor, shot down speculation that Trump’s vague statement means he may abandon the presidency.

“If he got elected president, he’d certainly serve,” Stone told the Times. “I’m fairly certain about that. You think he’d resign? I don’t see that happening. There is only one star in the Donald Trump show, and that’s Donald Trump.”