What a ‘suppressed’ 1991 documentary reveals about Donald Trump

'The old Trump and the new Trump? They're the same Trump.'

If the polls are to be believed, Donald Trump has a commanding lead in the race for the 2016 Republican presidential nomination. Can a “suppressed” 1991 documentary change that?

Trump’s lead, surprising though it may be to some, should not be taken lightly. As David Leonhardt argues for the New York Times, we should shrug off the urge among some to dismiss or treat him solely as entertainment. And that seems to be the intention behind the recent release of the documentary Trump: What’s the Deal?.

“Now that Trump is running for president, it is time for the American People to meet the real Donald and learn how he does business,” as the documentary’s website explains it. “The old Trump and the new Trump? They’re the same Trump.”

“The old Trump and the new Trump? They’re the same Trump.”

Leading up to the release of Trump: What’s the Deal? (the title is a play on Trump’s bestselling book, Trump: The Art of the Deal), the media has shed light on some of Trump’s past, including his use of underpaid immigrant labor (both legal and undocumented) for his empire, the fact that four of his companies have filed for bankruptcy, and the allegations that he violently raped ex-wife Ivana while they were married.

Combine these revelations with his statements on some Mexican immigrants being “rapists” and John McCain’s military record (“He’s not a war hero. … He was a war hero because he was captured. I like people who weren’t captured.”), and it’s hard to be surprised by anything this documentary reveals. Instead, the film simply solidifies the boastful and corrupt image of Trump as a person who lives in a universe of exaggeration and hyperbole, all for the benefit of money and notoriety and at the expense of everyone else around him.

Trump: What’s the Deal? documents the activities of the real-estate mogul during “the decade of greed,” arguing against Trump’s image as a “self-made” billionaire while highlighting the greed, coldness, arrogance, and lack of humanity that the film says pervades his pursuit of wealth and fame. According to the documentary (and media reports), he owes everything to his father, Frank Trump, who accumulated a fortune and made political connections ahead of his son; Donald’s fortune, like his father’s, was amassed on the backs of taxpayers through the use of tax abatements, the film claims.

Among other things, Trump addresses the candidate’s association with the short-lived United States Football League, hinting at the possibility that its dismantling was due in large part to Trump’s attempt to merge with the NFL; Trump’s involvement with Mike Tyson; the fact that Trump appointed his then-wife, Ivana, president of New York’s Plaza Hotel for a salary of “$1 per year plus all the dresses she can buy;” and the lawsuits he filed against Palm Beach International Airport because his Mar-A-Lago property (once an estate, now a club) sits directly in the airport’s flightpath, a dispute that continues today. (The most recent lawsuit is for $100 million).

If Trump were asked about the film, he’d probably dismiss it as propaganda created by rival businessman Leonard Stern, who was an investor for the film.

Ned Schnurman, an Emmy-winning television producer mostly known for his role in the creation of the successful television series on press criticism, Inside Story, reportedly approached Stern about a series documenting men “whose persona took on a life of its own.” In the front page story of the September 1989 issue of New York Magazine, Edwin Diamond details the “feud” between Trump and Stern, and the process by which the documentary was made and ultimately failed to be distributed, resulting in little more than a screening of the film in Bridgehampton. 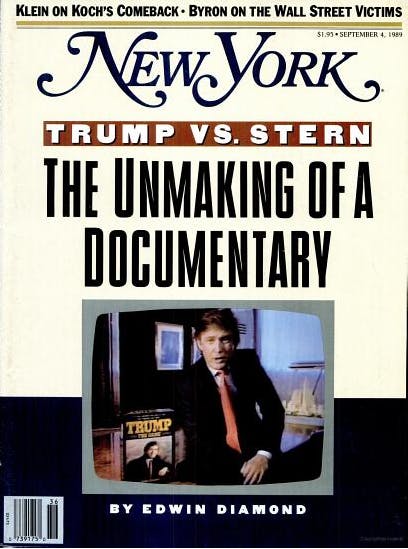 Everyone involved in the making of the film insists that Stern had no creative or editorial control of the project, and that he actually stayed far away from it. “It’s vintage Trump to try and control everything done about him in the media,” Schnurman told New York. In fact, everything expressed in this documentary pales in comparison to the ways Trump has recently expressed himself, so it’s hard to believe this film is the work of a jealous rival.

Aside from its entertaining qualities, this documentary helps us contextualize Trump’s shenanigans and the image that he tries to control. To understand Trump at this point in his career—if you can call it that—is to understand him at a point in his life where he wants to remain relevant. During his 2016 campaign announcement, he boasted, “I’m really rich … that’s the kind of thinking you need for this country. It sounds crass; it’s not crass.”

Being rich seems to be the only marker of success in Trump’s universe and the main reason why he thinks he should be president. But you likely already knew that.