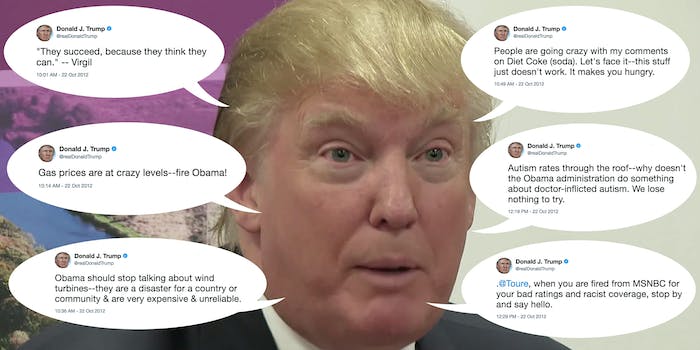 This one day illustrates how Trump operates.

Since taking office, President Donald Trump has had some incredibly frenetic days on Twitter, sending the entire nation off the rails by the force of his schizophrenic, 140-character missives. Despite a promise after elected to make his Twitter feed more “presidential,” it’s the same as ever, a remarkably public crystal ball that displays his unfettered id.

While you could pick any random day from his feed to illustrate his unique combination of bravado, contradictions, and fake news, one particular day on Twitter gives you absolutely everything you need to know: Oct. 22, 2012. Every single one of Trump’s personality traits—his desire for attention, his compulsion toward half-truths, his obsession with himself, his poor grasp of the English language and basic tenets of humanity—is on full display.

It’s an amazing 24 hours, and it kicks off with a fake quote.

Trump’s supersized belief in his own ability helped propel him all the way to the presidency. The only problem with that quote is that in Book V of the Aeneid, the legendary Latin poet Virgil writes, “They can because they think they can.”

Todd had called him and GE CEO Jack Welch out earlier after the two accused the Obama administration of lying about unemployment numbers to help bolster their reelection case.

Eight minutes later, he launches his first direct attack of the day on Obama.

In 2012, gas prices were, in fact, the highest they’d ever been, the national average having shot up a dollar over the past three years. But the president, of course, cannot be fired.

Trump then segues into the world of sports. He also misspells the word “you.”

Trump is talking about livetweeting the third debate of the 2012 presidential election between Barack Obama and Mitt Romney.

The anti-wind turbine movement in Scotland against @AlexSalmond is amazing–keep going Scots, save your country!

This is one of Trump’s weirdly staunchest principles. He tweets fervently about his disdain for wind turbines, lashing out at the inanimates object for causing the death of birds, and for how ugly he thinks they are. In 2010, the Department of Energy said that wind turbines caused fewer bird deaths than other manmade structures, such as buildings. Trump’s current Department of Energy also considers turbines to be an affordable and reliable source of energy.

For a person who has changed his stance on a number of subjects, seemingly on a whim, nothing can get him to approve of wind power.

The president reportedly drinks upwards of 8 to 12 Diet Cokes a day, and he recently clocked in just one pound shy of obese at his annual physical.

You can be forgiven for assuming this was about Trump’s fallacious and long-held belief that Obama wasn’t an American citizen, but it was revealed a couple of days later that Trump was offering Obama $5 million for his college transcripts. He did not succeed in this endeavor, but he did tweet a story about his tweet.

He offered this insight into presidential elections.

Then he pivoted to his long-held stance that vaccines cause autism. That the Measles-Mumps-Rubella vaccine causes kids to develop autism is a staunchly held theory of some in fringe communities.The CDC says there is no proof of a tie between autism and vaccines, but Trump nonetheless appears to blame the Obama administration for the rate of autism in America. Keep in mind, it’s not even noon at this point.

Lots of autism and vaccine response. Stop these massive doses immediately. Go back to single, spread out shots! What do we have to lose.

We should march on Washington re:autism–with leadership & common sense the numbers would drop precipitously!

Then Trump accused Obama of wanting to start a war with Iran to get re-elected.

He then laid out his hopes for that evening’s debate.

This was the third debate between Obama and Romney. The first two covered the economy and domestic policy.

It’s certainly exciting when your kids have children, but those congrats lose their efficacy when, 23 minutes later, you dive back into a racially motivated Twitter fight.

He circled back to his argument from earlier about wind turbines in Scotland—which he didn’t like because they could be seen from his golf course there—and lashed out at the First Minister of Scotland over a terrorist attack in 1988.

Abdelbaset al-Megrahi was released three years earlier with terminal cancer, and while Scottish law does not require Trump to comply with their decision to release terrorists on humane grounds, Trump was asked to sign a letter supporting the decision and refused. Trump believes Salmond then moved to put wind farms near Trump’s golf course as retribution.

He called a person “Dopey.”

Trump pivoted back to Obama.

After three foreign policy adjacent tweets, the billionaire businessman was back to what he does best: discussing celebrity gossip.

Trump, over the previous few weeks, had, for some reason, been asserting himself into the story about Robert Pattinson, Kristen Stewart, and her rumored affair. To this day, no one knows why. But for a man who has publicly cheated on his significant others, he took a very vitriolic stance toward a woman who cheated, saying she couldn’t be trusted.

This is a perfect example of how the president has an uncanny ability to hype himself and craft a story. He sent out a purposely ambiguous tweet, let the media cover it, and then declared it a success.

And, of course, he linked to Breitbart.

As for saying he would livetweet the debate, he sent just two tweets during the event.

.@MittRomney looks much calmer, and Obama should stop nodding his head backwards and forward.

In one day, Trump hit out against renewable energy, vaccines, soda, celebrity couples, a Black writer, and the president—a perfectly normal day for this perfectly “stable” human.

Just in case you think this day was an aberration, he woke up next day and tweeted this.

I always said that @lancearmstrong had to keep fighting the charges. By stopping, he gave his enemies an opening.