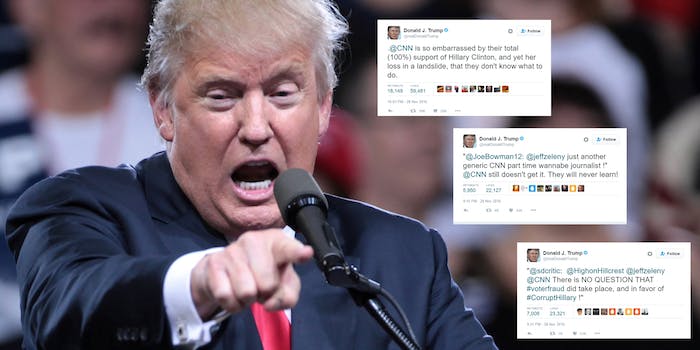 The president-elect indulged in another late-night tweetstorm.

It all began Monday, when CNN senior Washington correspondent Jeff Zeleny discredited Trump’s tweet from the previous day that claimed he won the popular vote “if you deduct the millions of people who voted illegally.”

In a segment on Anderson Cooper 360, Zeleny pointed out how Trump has yet to back up his claim with evidence, calling Trump’s assertion “blatant and baseless.” Zeleny also said the president-elect was being a “sore winner.”

Trump responded on Twitter last night with a combo of his original tweets and quoted tweets of other users, occasionally adding his own comments and erasing the original negative retweets before replying.

Trump also managed to retweet a self-identifying 16-year-old supporter who goes by @Filibuster.

"@FiIibuster: @jeffzeleny Pathetic – you have no sufficient evidence that Donald Trump did not suffer from voter fraud, shame! Bad reporter.

Zeleny took the criticism in stride and tweeted at Trump that, as a journalist, he’s open to any information the president-elect has.

Around 10pm, Trump seemed to wrap up his rant.

.@CNN is so embarrassed by their total (100%) support of Hillary Clinton, and yet her loss in a landslide, that they don't know what to do.

But alas, he re-opened the discussion in the wee hours of the morning.

And that concludes Trump’s latest attempt at holding the press accountable. There’s no telling what the rest of today holds.