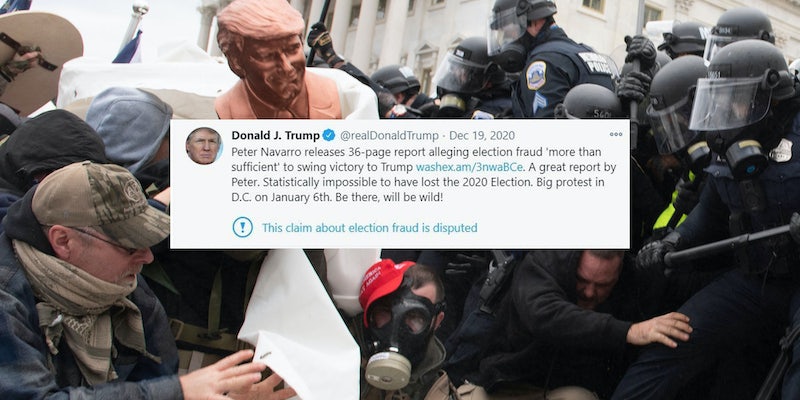 Trump’s ‘wild’ protest tweet reportedly being looked at for riling up Jan. 6 rioters

Trump wrote, 'Big protest in D.C. on January 6th. Be there, will be wild!'

Criminal and congressional inquiries into the Capitol riot are now examining whether former President Donald Trump incited the riot with a tweet.

In the early morning hours of Dec. 19, 2020, Trump urged his supporters to come to Washington, D.C. when Congress certified the election. “Big protest in D.C. on January 6th,” he tweeted. “Be there, will be wild!”

The Justice Department and a House select committee have found extensive evidence that far-right groups and figures viewed Trump’s tweet as a call to action, the New York Times reports.

Trump supporters, allegedly including members of the Proud Boys and Oath Keepers, reportedly reacted by establishing communications lines and amassing weapons and other equipment for what would be a violent assault on the Capitol.

The Times reports that three days after Trump’s tweet, Meggs posted on Facebook, “He wants us to make it WILD that’s what he’s saying. He called us all to the Capitol and wants us to make it wild!!!” That day Rhodes reportedly did an interview in which he said that if President Joe Biden took office there would be “a massively bloody revolution.”

Rhodes subsequently posted a letter online vowing that “tens of thousands of patriot Americans” would be in the capital on Jan. 6 and would stow “mission-critical gear” outside the city, the Times adds.

Meggs and Rhodes have been charged with seditious conspiracy over the riot. Both have pled not guilty.

Prosecutors allege that the Proud Boys were also inspired by Trump’s Dec. 19 tweet to begin making plans to travel to the Capitol with malevolent intent.

Subsequently, a member of a private group Tarrio allegedly selected to coordinate their plans for Jan. 6 reportedly wrote on Telegram, “Time to stack those bodies in front of Capitol Hill.”

Biggs and Tarrio have since been charged with conspiracy and other crimes associated with the Capitol riot. They’ve plead not guilty. The indictment against Tarrio referenced Trump’s tweet.

Users on the pro-Trump site TheDonald.win were similarly riled by the tweet, investigators say.

The Times reports that activity on TheDonald.win was mentioned in a December 2020 report by the Capitol Police about the protest planned for Jan. 6. The report, by the force’s intelligence arm, noted that Trump supporters planned on “confronting members of Congress and carrying firearms during the protest.”

A House committee report released Sunday said that an anonymous user on the site wrote of Trump’s tweet that he “can’t exactly openly tell you to revolt. This is the closest he’ll ever get.”

Other users commented urging one another to “get into the Capitol building,” surround the entries and exits, and, “Bring guns. It’s now or never.”