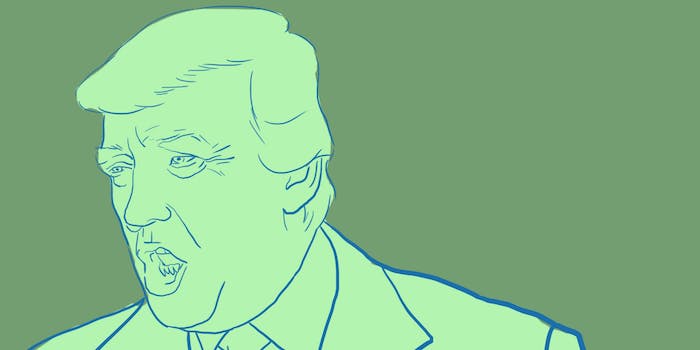 It's not the first time something like this has happened.

Yet another confrontation occurred between Donald Trump supporters and immigration activists Friday at a Trump campaign event—but this time, the confrontation became violent when a supporter dragged and kicked an activist as the crowd surrounding them chanted, “U.S.A.! U.S.A.!”

The incident was captured on video by NBC. The activist, Ariel Rojas, told NBC that he attended the rally with a group of fellow Florida International University students and was holding a sign of the letter Q, helping to spell E-Q-U-A-L-I-T-Y, when he was attacked. Rojas said Trump supporters grabbed his sign and ripped it apart.

NBC’s video shows a man grabbing Rojas by his shirt and dragging him across the floor, kicking him, and then walking away while pumping his fists in the air.

A representative from Trump’s campaign told NBC that the man was “merely an attendee” at the event and was not a campaign staffer or an employee of the Trump National Miami Doral Resort where the event was held.

The incident is the latest in a series of confrontations between Trump fans and immigration activists. In September, Trump supporters tore up activists’ signs at a rally, and one of his security guards punched a Hispanic protester. Trump’s campaign revoked press credentials for Friday’s campaign event from Fusion reporters and its parent company, Univision, after Jorge Ramos confronted Trump on his immigration stance in August.

Trump’s stance on immigration was also linked to the beating of a Boston man in August. Trump responded to the attack by calling his supporters “passionate.”