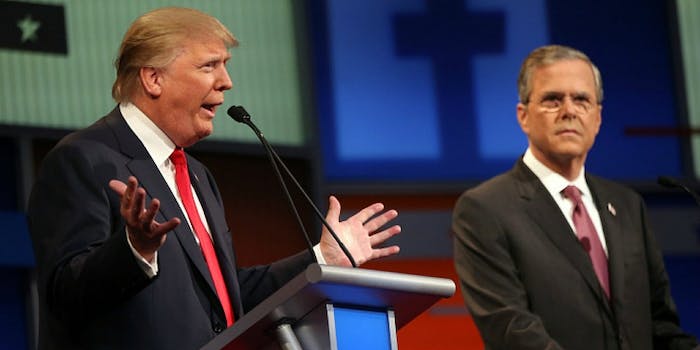 Donald Trump: Master of the redirection.

Republican frontrunner Donald Trump has blasted long-presumed Republican frontrunner Jeb Bush at every opportunity. Either Trump calls Bush low energy or he tries to bestow upon him a Willie Horton-type ad or he takes a swipe at his wife or he uses Barbara Bush in an attack ad against her son.

But this latest stunt might be the trolliest troll of all.

So https://t.co/3gYINmPYON redirects to https://t.co/qV8V98A6rT and that is the sickest of burns, and oh my, the shade of it all, I can't…

And it’s true. If you type JebBush.com into your browser, this is what pops up on your screen.

Bush’s official website is Jeb2016.com, and if you type “Jeb Bush” into the Google machine, JebBush.com does not show up on the first page of results. So, that’s good for Bush. But it makes sense that if somebody wanted to discover more information about Bush, they would simply type JebBush.com into their browser and then, no doubt, be wooed by Trump’s latest immigration policies.

And it’s not the only Bush-related website that doesn’t actually relate to anything positive. As pointed out by the Hill, JebBushforPresident.net is used to highlight the perceived negatives of Bush’s record, while JebBushforPresident.com is a blog about the gay couple who owns the domain name.

This also isn’t the first time a Republican hopeful has been trolled. A website associated with Wisconsin Gov. Scott Walker, who has since departed the presidential race, was redirected to a Planned Parenthood website, and if you try to visit DonaldDTrump.com, you’ll actually be redirected to Marco Rubio’s Internet space.

Unfortunately, all emails sent to Bush at jebbush.com were marked returned to sender.

Photo via Peter Stevens/Flickr (CC BY 2.0)