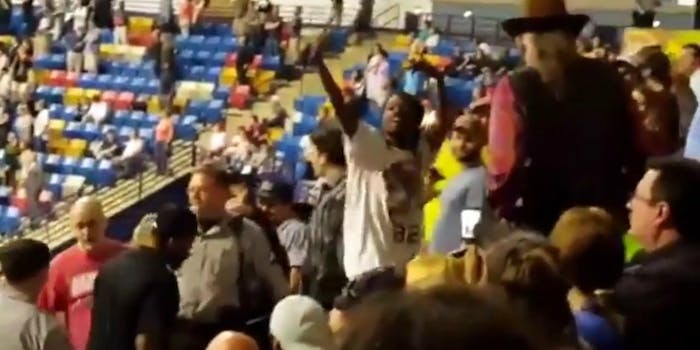 It continues to be nasty for protesters at Donald Trump rallies.

Protesters interrupted yet another Donald Trump rally this week, and yet again, the Republican front-runner’s supporters took the situation into their own hands.

On Wednesday, a long-haired man in a large hat sucker-punched a male protester who was being escorted out of a Trump rally in Fayetteville, North Carolina. Uniformed officers then took the protester to the ground while the man who threw the punch was ignored.

The incident comes days after a U.S. Secret Service agent slammed at Time magazine photographer to the ground in Virginia and multiple men shoved a woman in Louisville, Kentucky.

Here’s what the Fayetteville incident looked liked from multiple angles.

How the #police did @undergroundkeem after HE got punched by a #trump supporter. Watch my previous post. There's no #edit #fayettenam #america #dumptrump #gopro #vote

Rakeem Jones, the man who took the punch, told the Washington Post he had gone to the rally with a group of friends that included a white woman, a Muslim, and a gay man. Though at least one member of his group was shouting while Trump was speaking, he said his friends did not get physical. On the way out, Jones said, the punch caught him by surprise.

“Boom, he caught me,” Jones, 26, told the Post. “After I get it, before I could even gain my thoughts, I’m on the ground getting escorted out. Now I’m waking up this morning looking at the news and seeing me getting hit again.

“It’s happening at all these rallies now and they’re letting it ride. The police jumped on me like I was the one swinging,” Jones said, adding, “My eye still hurts. … It’s like this dude really hit me and they let him get away with it. I was basically in police custody and got hit.”

Ronnie C. Rouse, who was part of Jones’ group, said that when Trump began to speak, somebody in the crowd screamed “You need to get the fuck out of there” at his friends, and that, when they were being led out by uniformed officers, somebody shouted, “Go home, n—–s.”

Sgt. Sean Swain of the Cumberland County sheriff’s office told Fox News that the incident is under investigation and that police are trying to identify the man who threw the punch. (See update below.)

As for why the man wasn’t arrested, Swain explained that it was not the right time to escalate the situation.

“Both the officers are looking down [in the video] when the camera phone turns away when the guy punches,” Swain said. “If we had stayed and tried to reason things out right there it would have gotten very bad.”

Trump’s next big rally will be in Chicago on Friday, and more than 10,000 protesters have committed to attending. More violence could be expected as well, which is why close to 200 University of Illinois faculty members have asked school administrators to cancel the event.

Update 4pm CT, March 10: Inside Edition has identified the Trump supporter as 78-year-old John McGraw. In a video obtained by Inside Edition, McGraw says Jones deserved the assault because he was “not acting like an American.” McGraw added, “Next time, we might have to kill him.”