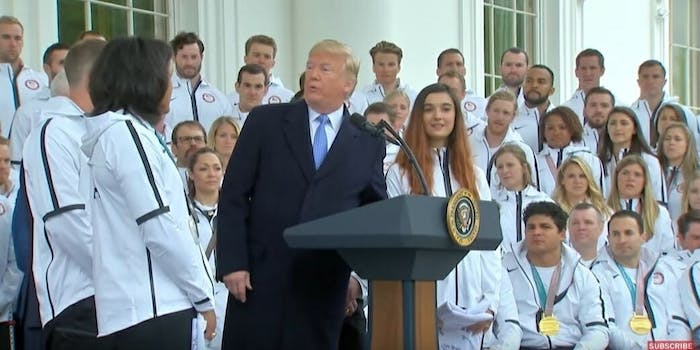 He called the Paralympics a little 'tough to watch.'

Donald Trump, whether it was intentional or not, picked a fight with the top U.S. Paralympians on Friday. During a ceremony at the White House to honor those who competed in the 2018 Paralympics Games in South Korea, Trump made an insensitive comment by saying the event was tough to watch.

WATCH: During an event with Team USA Olympians and Paralympians at the White House, President Trump said, "What happened with the Paralympics was so incredible and so inspiring to me. And I watched — it's a little tough to watch too much, but I watched as much as I could." pic.twitter.com/geYUUu9vmg

Did he mean to be insensitive by saying it was tough to watch? Some thought not, believing his remarks were more of a reflection of vocational time management issues. But others couldn’t help but remember his revolting display during the presidential campaign when he made fun of a disabled New York Times reporter.

No matter how you took the off-handed comment, there’s little question that the Paralympics wasn’t pleased with it and subtweeted Trump on Saturday to prove it.

Figure skater Adam Rippon, who refused a meeting with Mike Pence during the Olympics and then declined a trip to the White House, also weighed in on Trump’s comment.

“Current mood,” he tweeted. “Having no regrets about missing this trip.”