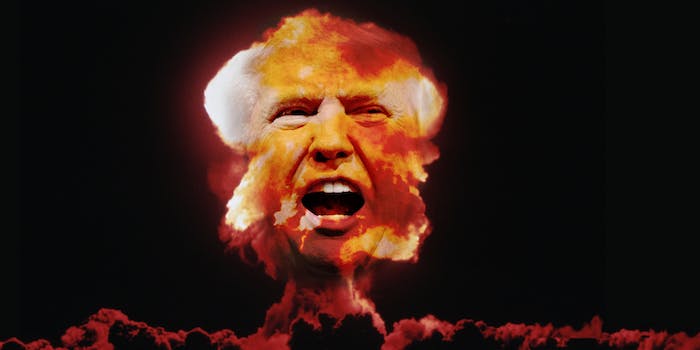 Nothing to see here?

A spokeswoman for Donald Trump‘s presidential campaign denied an allegation made by MSNBC host Joe Scarborough that the Republican nominee asked a foreign policy advisor why the United States cannot use nuclear weapons.

On Wednesday, Scarborough said during a group interview with Gen. Michael Hayden, former director of the CIA and NSA, that Trump once asked an unnamed foreign policy expert “three times” why the U.S. “can’t use” nuclear weapons “if we have them.”

“I’ll be very careful here,” Scarborough said. “Several months ago, a foreign policy expert on international level went to advise Donald Trump. Three times he asked about the use of nuclear weapons. Three times he asked, at one point, ‘If we have them, why can’t we use them?’ That’s one of the reasons why he just doesn’t have foreign policy experts around him. Three times, in an hour briefing: ‘Why can’t we use nuclear weapons?’”

The allegation, which is thus far based entirely on Scarborough’s comment, touches on an oft-used warning about Trump, whom Hayden described as too “erratic” to be president—a common sentiment among Trump critics. During her Democratic National Convention speech last week, for example, Trump rival Hillary Clinton said, “A man you can bait with a tweet is not a man we can trust with nuclear weapons.”

Trump may not have asked the question Scarborough said he did, but the candidate has made controversial statements about nuclear weapons in the past. In March, Trump told the New York Times that it could benefit the U.S. if Japan had nuclear weapons, a sentiment he also said applies to Saudi Arabia and South Korea. He then told CNN’s Anderson Cooper that nuclear proliferation is just “going to happen anyway.”

Just a few days later, Trump said he would not rule out using nuclear weapons in Europe. “Look, nuclear should be off the table, but would there a time when it could be used? Possibly,” Trump told MSNBC’s Chris Matthews when asked about the use of nuclear weapons. Pressed on whether he’d use them in Europe, Trump said, “I am not—I am not taking cards off the table.”

Nine countries possess a total of 15,350 nuclear weapons, according to the International Campaign to Abolish Nuclear Weapons (ICAN). Those countries are: the United States, Russia, the United Kingdom, France, China, India, Pakistan, Israel, and North Korea. Russia holds the greatest number of nuclear warheads (7,300), according to ICAN, followed by the U.S. (6,790).

Five other countries—Belgium, German, Italy, Netherlands, Turkey—hold nuclear weapons for other nations. Another 20 are in nuclear alliances.

The United States is the only country to have used a nuclear bomb in war.