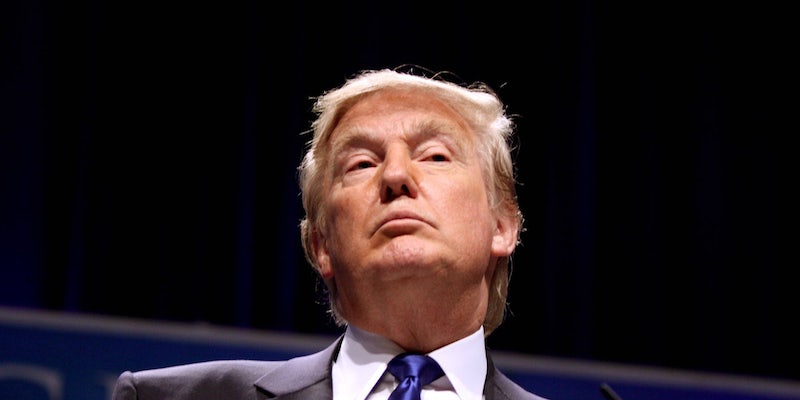 Donald Trump nominated for president, officially becomes the leader of the Republican Party

There's no turning back.

Billionaire Donald Trump, a real estate tycoon who campaigned on fewer rights for some because of the religion they practice and who once categorized himself as “very pro-choice,” is now the leader of the Republican Party.

Still licking their wounds after a disastrous opening day which saw Trump’s wife, Melania, publicly shamed for plagiarizing First Lady Michelle Obama during a Monday night speech, Republicans formally handed Trump control of the party as delegates to the convention, bound by the will of primary and caucus voters, cast their votes for the reality TV star.

With the nomination comes a bitter end to the so-called “Never Trump” movement. Denigrating the party frontrunner as anathema to the conservative principles of Ronald Reagan’s Republican Party, a handful of delegates had held on to the hope that, perhaps, there was a more traditional choice among them. Now, that’s all history.

Trump’s victory was assured by the delegates from his home state of New York on Tuesday as the roll call commenced on the convention floor. His son, Donald Trump, Jr., announced the votes, yelling, “Congratulations Dad, we love you.”

Sen. Jeff Sessions of Alabama, an ardent Trump supporter, nominated Trump just before 6pm ET, concluding, “Donald Trump is the singular leader that can get this country back on track.”

The plagiarism scandal that rocked the convention late Monday night crushed the GOP’s hopes for a strong and stable start. Melania Trump, it seemed, copied word-for-word several sentences from a 2008 Michelle Obama speech. Many Republican leaders, while avoiding the term “plagiarism,” nevertheless acknowledged the words were duplicative.

Top Trump aide Paul Manafort, however, found a way to blame Hillary Clinton, the presumptive Democratic nominee, for the debacle.

“It’s just another example, as far as we’re concerned, that when Hillary Clinton is threatened by a female, the first thing she does is try to destroy the person,” Manafort said.