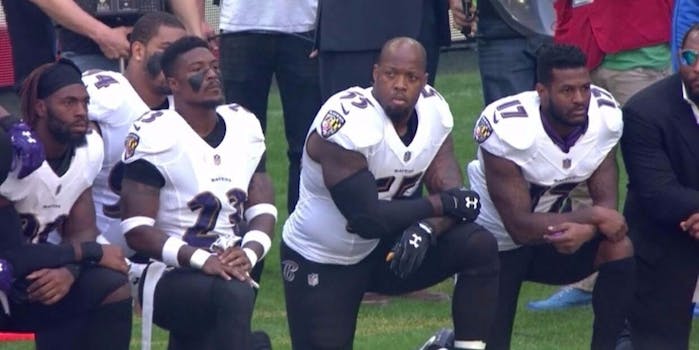 A Dolphins player teared up while talking about it afterward.

Since he referred to former NFL quarterback Colin Kaepernick as a “son of a bitch” on Friday night, President Donald Trump has tweeted a dozen times about the league’s players kneeling during the national anthem.

Even after so many NFL players showed unity against his words by locking arms and kneeling on Sunday, Trump continued his attacks against the league and its high-profile employees Monday morning.

Many people booed the players who kneeled yesterday (which was a small percentage of total). These are fans who demand respect for our Flag!

Trump also took heavy online criticism for not mentioning the devastation from Hurricane Maria in Puerto Rico and for his continued attacks against a league that’s mostly Black.

Although reportedly 70 percent of players in the league are Black—and remember, Kaepernick started kneeling in 2016 to protest racism and police brutality against people of color—Trump tweeted Monday morning that his criticism isn’t a racial issue.

The issue of kneeling has nothing to do with race. It is about respect for our Country, Flag and National Anthem. NFL must respect this!

Fourteen minutes before that statement, Trump tweeted about NASCAR owners who recently said they would punish and/or fire any race car drivers who use the national anthem to protest.

So proud of NASCAR and its supporters and fans. They won't put up with disrespecting our Country or our Flag – they said it loud and clear!

Considering only four Black drivers have made it to the top level in NASCAR in its history—including current driver Bubba Wallace—it’s not a difficult reach to believe that Trump is praising white sports and blasting Black ones. This comes on the heels of the president bashing Steph Curry for not coming to the White House, while praising the Pittsburgh Penguins’ decision to attend a celebration for their NHL championship (according to estimates, only 5 percent of NHL players are Black).

Please to inform that the Champion Pittsburgh Penguins of the NHL will be joining me at the White House for Ceremony. Great team!

But to NFL players, more than 200 of whom knelt or sat during the anthem on Sunday, Trump’s attack certainly had a racial component.

More than ever we remain committed to advocacy 4 equality & social justice 4 all! @Eagles fans Join us in locking arms 4 unity in our city!

Dolphins safety Michael Thomas started breaking up when talking about Trump calling him "a son of a b!tch." pic.twitter.com/Z4wroPcvzW

“We will not stand for the injustice that has plagued people of color in this country,” Seattle Seahawks players said in a joint statement. “Out of love for our country and in honor of the sacrifices made on our behalf, we unite to oppose those that would deny our most basic freedoms.”

Even Patriots owner Robert Kraft, one of Trump’s biggest NFL allies, who donated $1 million to help with the president’s inauguration, criticized him in a statement released Sunday.

Trump might be tweeting the truth when he writes that it’s not a racial issue. It might not be a racial issue for him. But when NFL players protest because they feel like this country doesn’t recognize equality, there’s no other way for them to see it.