Donald Trump’s new campaign poster has 4 too many Nazis

An 'intern' has apologized for creating and posting the picture.

Why did Donald Trump, a 2016 Republican presidential candidate, just tweet a photo of his face superimposed next to a picture of Nazi soldiers?

“We need real leadership,” reads the caption below the image, which depicts four World War II era German Waffen-SS soldiers marching under a photo of the White House. “We need results. Let’s put the U.S. back into business.”

The Nazis in Trump’s appalling photoshop image were first spotted by Michael Niemberg. 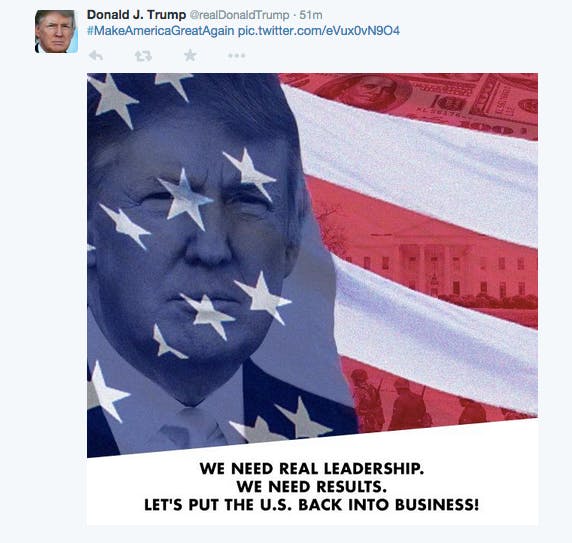 “Mr. Trump has been in Charlottesville, Virginia, all day at the opening of a development,” a Trump campaign spokesperson told the Daily Dot. “A young intern created and posted the image and did not see the very faded figures within the flag of the stock photo. The intern apologized and immediately deleted the tweet.”

The stock photo allegedly grabbed by Trump’s intern appears to depict a reenactment of some kind, a photo of which was uploaded to iStock in 2006.

Three of the soldiers are dressed in the Waffen-SS’s distinctive spotted Flecktarn camouflage. Two of them are wearing Nazi uniforms with cuff titles, which are also typically associated with the Waffen-SS units. 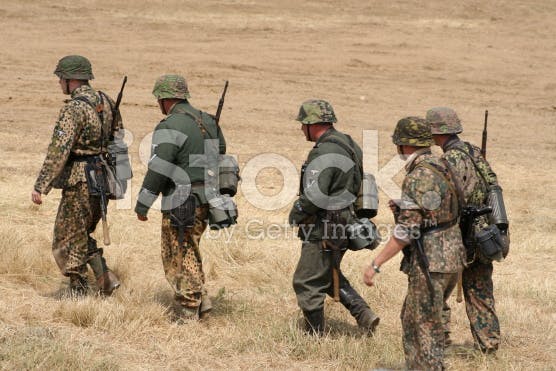 The image was only up on Trump’s Twitter and Facebook accounts for about an hour before being deleted. Fortunately, we’ve archive both of those Web pages (here and here), preserving them for American generations to come.