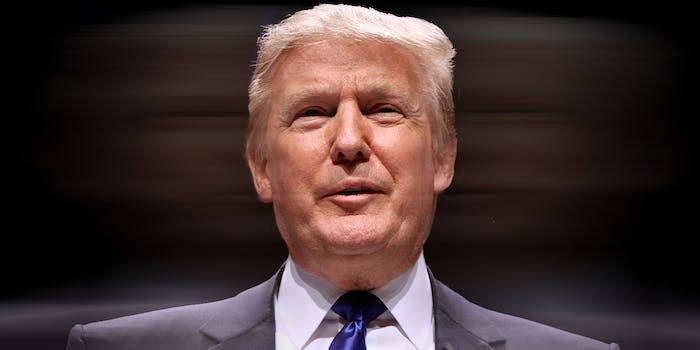 The campaign has yet to provide proof of the candidate's bold claim.

A senior advisor to Donald Trump’s presidential campaign said Tuesday that the facts had vindicated his candidate’s allegations that thousands of Muslims in New Jersey celebrated the Sept. 11, 2001, terrorist attacks.

But the evidence that the adviser, David Scavino Jr., cited does not add up—literally.

Trump made this initial claim at a Nov. 21 campaign rally in Alabama where he called for increased surveillance of mosques:

In an attempt to prove Trump’s claim, Scavino unearthed a 2001 WCBS news report from correspondent Pablo Guzmán. In the 15-second clip that Scavino tweeted, Guzmán cites “an investigator” who told him that there were suspects on a roof with a model of the World Trade Center and binoculars.

“They knew,” Guzmán said, quoting the investigator, “that the planes were going to hit and they wanted a ringside seat.”

But Guzmán’s report lasted longer than 15 seconds. He continued by quoting an anonymous source who told him that the apartment building, near the site of a previous FBI raid, was “swarming” with suspects.

“Suspects who, I’m told, were cheering on the roof when they saw the planes slam into the Trade Center,” said Guzmán. “Police were called to the building by other neighbors and found eight men celebrating—six of them tenants in the building.”

Breitbart declared in a headline on Wednesday: “Trump 100% Vindicated. CBS Reports ‘Swarm’ On Rooftops Celebrating 9/11.” But Guzmán’s report only mentioned a single roof, not “rooftops”—a word that writer John Nolte used four times in his article. In addition, there is a significant difference between what Trump claims and what Guzmán reported.

Trump’s statement that “thousands and thousands” of people were celebrating means that several thousand people, or at least 4,000 of them, were celebrating. Scavino’s smoking-gun report, however, mentioned only eight.

To illustrate the difference, here’s what eight people look like standing in a crowd of 4,000.

“People are arguing falsely that the fact that only 8 suspects were apprehended contradicts the ‘swarm’ claim,” wrote Nolte, complaining that Trump’s critics were engaging in a merely semantic argument over the figure.

Guzmán took to Twitter on Tuesday to add context to his report, explaining to Trump’s campaign adviser that the story was difficult to follow up on. “Those were chaotic times,” he said, “but law enforcement determined there were no ‘rooftop conspirators.’”

“Far from thousands,” said Guzmán, who added that even eight celebrants would be disturbing—but also that Muslims in Jersey City angered by the celebration were communicating with police.

Trump’s campaign has yet to produce evidence of “thousands and thousands” of people in New Jersey cheering as the Twin Towers fell.