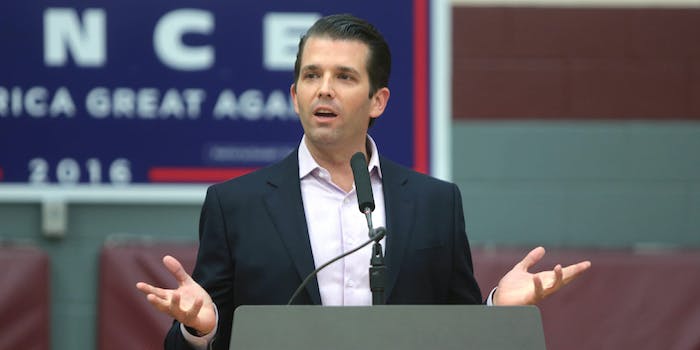 Trump Jr. says he’s more worried for his sons than his daughters in #MeToo era

In an exclusive interview with the Daily Mail, Donald Trump, Jr. said he was more concerned for his sons than his daughters in the #MeToo era.

“I’ve got boys, and I’ve got girls. And when I see what’s going on right now, it’s scary,” Trump said. When asked if he was more frightened for his daughters or sons, Trump said, “I mean, right now, I’d say my sons.”

Trump’s statement is loaded; it echoes the narrative that women falsely accuse men of sexual assault all the time, that they’re motivated by greed, revenge, money, politics, or attention, and in coming forward with accusations, they ruin men’s lives.

But that’s counterfactual. Realistically, men—especially wealthy white men—who are accused of sexual assault or harassment don’t face lasting consequences. They face the momentary discomfort of being confronted with their possibly violent or illegal behavior, then they go back to doing standup sets, advising the Serbian government, or soon to be sitting on the Supreme Court.

Trump also implied that the accusations against Judge Brett Kavanaugh are politically motivated, which only hurts “real victims” when they try to come forward.

Trump’s invocation of a “real victim” presents him as someone who really does care about people who really experience sexual assault, but one has to wonder what that looks like to Trump. Sexual violence isn’t rare, but acting like it’s not a widespread social problem absolves people like Trump from having to examine their own attitudes and behaviors, or from examining the attitudes and behaviors of people who look like them or run in their social circles.

In the same interview, Trump’s girlfriend, former Fox News host Kimberly Guilfoyle, said that all victims of sexual assault should be heard, but cautioned that some accusations are politically motivated.

Women like Guilfoyle are part of the problem. Guilfoyle, a former prosecutor, stressed the importance of getting the “facts” out there, but then pivoted to tacitly reinforce the opinion of her boyfriend, saying that the accusations could be politically motivated.

Guilfoyle may indeed believe that, but there’s no evidence to support the theory.

For Guilfoyle to hang on to her position—as a de facto member of the Trump family—she must buy into and support this line of thinking. To disrupt it, to side with survivors, in a family where the patriarch is an accused sexual predator, could be ruinous. It’s too big a risk.

And people were not here for Trump Jr.’s take on the matter.

Guilfoyle and Trump were in Montana campaigning for Senate candidate Matt Rosendale, who is running to unseat Democrat Jon Tester.