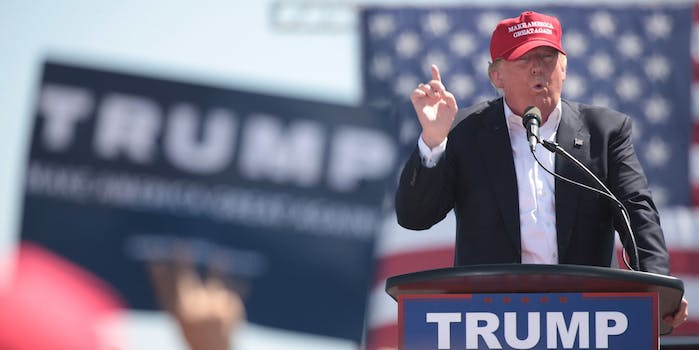 Donald Trump thinks free speech in the U.S. is too free

Trump says he's a ‘tremendous believer in the free press,’ but...

Donald Trump says free speech rights in the United States are a bit too free.

In a recent interview with Miami’s CBS affiliate, WFOR, Trump said he would like to see the U.S. adopt libel laws like those found in the United Kingdom.

Asked whether he thinks the First Amendment provides “too much protection” to the media, Trump—who claims to be a “tremendous believer in freedom of the press”—said yes.

“In England, they have a system where you can actually sue if somebody says something wrong. Our press is allowed to say whatever they want, and they can get away with it,” Trump said. “And I think we should go to a system where, if they do something wrong—I’m a big believer, tremendous believer in freedom of the press; nobody believes it strong than me. But if they make terrible, terrible mistakes, and those mistakes are made on purpose to injure people—and I’m not just talking about me, I’m talking about anybody else—then yes, I think you should have the ability to sue them.”

The U.K.’s libel laws are far more restrictive, however, and require the person or publication who made the statements to prove they are legitimate on the grounds that they are considered false by the courts until proven otherwise.

The U.S. requires proof of “actual malice,” thanks to the 1964 Supreme Court case New York Times Co. v. Sullivan, and the freedom of the press to publish information sits at the heart of First Amendment protections.

Trump made a similar argument against press freedoms in February, but his statements hold new weight against the backdrop of a series of women accusing the Republican presidential nominee of sexual assault, including a People magazine reporter and two women whose stories were published by the New York Times.

In response to the allegations, Trump has threatened to sue the Times and the women who leveled the accusations.

“Nothing in our article has had the slightest effect on the reputation that Mr. Trump, through his own words and actions, has already created for himself,” McCraw wrote.

“If Mr. Trump disagrees,” McCraw concluded, “if he believes that American citizens had no right to hear what these women had to say and that the law of this country forces us and those who would dare to criticize him to stand silent or be punished, we welcome the opportunity to have a court set him straight.”