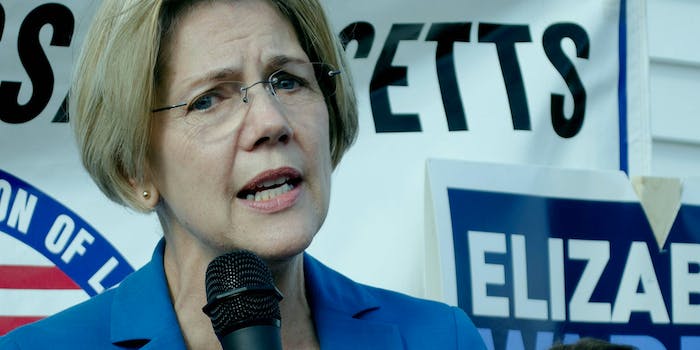 Elizabeth Warren, Donald Trump blast each other in Twitter fight

So far, Warren is landing more punches than Trump.

But when the billionaire businessman attempted to bestow an insulting nickname on Massachusetts Sen. Elizabeth Warren—who’s been whispered about as a potential vice-presidential pick for Clinton and who has already called Trump a “loser” (a term he must absolutely loathe)—she fought back and hit him even harder.

Earlier this week, Warren tweeted that Trump has “built his campaign on racism, sexism, and xenophobia” and that there’s more enthusiasm from the KKK about his presumed nomination than the leaders of his own party.

I hope corrupt Hillary Clinton chooses goofy Elizabeth Warren as her running mate. I will defeat them both.

Let’s properly check goofy Elizabeth Warren’s records to see if she is Native American. I say she’s a fraud!

Goofy Elizabeth Warren, Hillary Clinton’s flunky, has a career that is totally based on a lie. She is not Native American.

It took Warren less than 90 minutes to return the insults.

I called out @realDonaldTrump on Tuesday. 45 million saw it. He's so confident about his "counter punch" he waited until Friday night. Lame.

“Goofy,” @realDonaldTrump? For a guy with "the best words" that’s a pretty lame nickname. Weak!

If you think recycling Scott Brown's hate-filled attacks on my family is going to shut me up, @realDonaldTrump, think again buddy. Weak.

Whatever @realDonaldTrump says, we won't shut up. We won't back down. This election is too important, & he won’t step foot in White House.

As of Friday night, Trump had yet to respond to Warren’s latest social media attacks. Trump was probably getting himself something to eat.