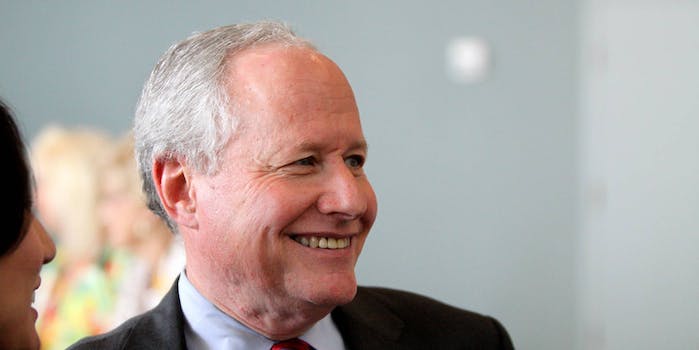 If politics is a sport, then Trump scored a goal here.

The conservative pundit’s predictions are so unbelievably bad that the Washington Post dedicated an entire Style section article to how bad they are. As of late January, he had declared that New York businessman Donald Trump had peaked in the Republican presidential primary no fewer than 11 times.

Trump secured the 1,237 pledged delegates needed to win the GOP nomination on May 26.

But Kristol—who told the Post that his awful predictions are merely ideas intended to provoke discussion and not truly representative of his real expectations—isn’t giving up yet. On May 29, he tweeted out a major prediction.

Just a heads up over this holiday weekend: There will be an independent candidate–an impressive one, with a strong team and a real chance.

If Kristol is correct, it would compound the already bad news for the Republican Party in November.

An independent candidate—at least, one whom the extremely conservative Kristol considers “impressive”—could siphon off a sizeable number of anti-Trump Republicans who would otherwise swallow their pride and vote for their nominee. If that happens, Trump’s chances of beating former Secretary of State Hillary Clinton, the likely Democratic nominee, shrink considerably.

Bill Kristol has been wrong for 2yrs-an embarrassed loser, but if the GOP can't control their own, then they are not a party. Be tough, R's!

The Republican Party has to be smart & strong if it wants to win in November. Can't allow lightweights to set up a spoiler Indie candidate!

If dummy Bill Kristol actually does get a spoiler to run as an Independent, say good bye to the Supreme Court!

As nicknames go, “Dummy Bill Kristol” isn’t Trump’s finest work. But in his first tweet, Trump actually undersells his main charge, that Kristol has been “wrong for 2yrs.” In fact, as has been extensively documented, being wrong is a long-running theme for Kristol.