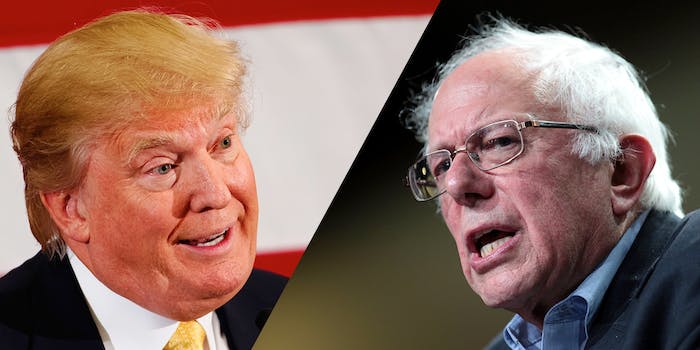 Sanders seems to be getting to Trump.

Bernie Sanders seems to be getting under Donald Trump‘s skin.

In a tweet posted Monday morning, Trump characterized the independent Vermont senator and Democratic presidential candidate as unstable, while simultaneously claiming that some of Sanders’ “allies” now support the reality TV star instead.

Strange, but I see wacko Bernie Sanders allies coming over to me because I'm lowering taxes, while he will double & triple them, a disaster!

Trump’s insult comes a day after Sanders appeared on CBS’ Face the Nation to make his case that working-class Americans who support Trump would be better off backing the self-proclaimed Democratic Socialist, who has made income inequality the centerpiece of his campaign.

While he called these concerns “legitimate,” Sanders condemned Trump’s tactic of stoking fears and “anger against Mexicans, anger against Muslims” as a way to address these issues.

“I think for his working-class and middle-class supporters,” Sanders said, “I think we can make the case that if we really want to address the issues that people are concerned about, we need policies that bring us together, that take on the greed of Wall Street, the greed of corporate America, and create a middle class that works for all of us rather than an economy that works just for a few.”

Sanders has proposed raising $6 trillion in new revenue, primarily by taxing corporations and wealthy Americans, while expanding Social Security, Medicare, and other entitlement programs. While he has not released specific tax rates, his main rival, former Secretary of State Hillary Clinton, claims that middle-class Americans would see their taxes go up by 9 percent under Sanders’ plan.

Trump’s plan, by contrast, would effectively cut revenue by $12 trillion over the next decade, with the top tax rate dropping from 39.6 percent to 25 percent. The plan would also expand the number of Americans who pay no income tax to include households making $50,000 per year or less.

This plan puts Trump on par with most mainstream Republicans. But that wasn’t always the case.

In 2000, Trump released a tax plan that would have been imposed an additional, one-time 14.25-percent tax on trusts and individuals with a net worth of over $10 million. This, Trump said, would raise $5.7 trillion in revenue, which he would have used to pay off the national debt.

But that was then. Today, Trump has moved away from Sanders on taxes, though he has shifted toward the senator on wages. While he repeatedly claimed that Americans’ wages were “too high,” Trump on Monday flipped his position after Sanders’ comments on Face the Nation.

The middle-class has worked so hard, are not getting the kind of jobs that they have long dreamed of – and no effective raise in years. BAD

Many of the great jobs that the people of our country want are long gone, shipped to other countries. We now are part time, sad! I WILL FIX!

Wages in are country are too low, good jobs are too few, and people have lost faith in our leaders.We need smart and strong leadership now!