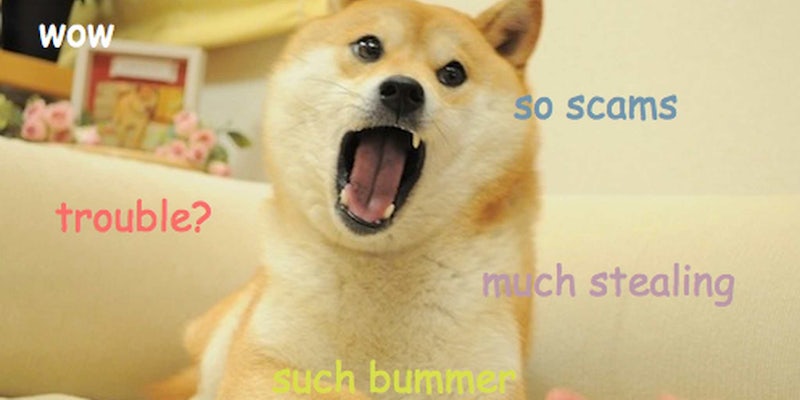 The Kickstarter of Dogecoin turns out to be a scam

So deception. Much feelings. Wow.

If the community that’s developed around the meme-themed virtual currency Dogecoin is known for anything, it’s a surprising sense of generosity. If there’s someone with a Dogecoin in his or her wallet, it’s a good bet they’ll give it to someone else before the day is out.

While this spirit has rapidly turned Dogecoin from a one-note joke into the most widely traded virtual currency on the planet, it’s also opened up the world of Dogecoin to a plague of scammers that threatens to eliminate much of the currency’s positive, carefree spirit and erect a roadblock in the way of widespread adoption.

About a month ago, a Reddit user going by the handle Dogestarter created a subreddit of the same name with the intention of using it as a platform for crowdfunding projects related to Dogecoin. Shortly after creating the community, he was approached by an individual going by the handle bootysweat2k11, who said he was interested in creating a separate website dedicated to the very same goal.

Dogestarter, who had worked on the Bitcoin-based crowdfunding site BitcoinStarter.com, offered to lend a hand by providing web hosting and domain name registration for a site that would become Dogecoinstarter.com.

?So the idea was to help fund the actual Dogecoinstarter platform through crowdfunding,” Dogestarter explained in an email. ?So he set up a placeholder site to just that. In doing so, people were able to donate dogecoins to the project. With 4-5 days left, a user detected…[bootysweat2k11] selling off dogecoins in the Dogecoin marketplace.”

Within a few days, the wallet holding the over two million Dogecoins donated with the intention of getting Dogecoinstarter.com off the ground had been emptied by a scam artist playing off of the community’s good intentions.

The address now directs to a page detailing the scam.

The total dollar figure here isn’t enormous in the grand scheme of things. Since a single dogecoin is only worth about a tenth of a penny, the scammer only got away with about $2,600—with half of that reportedly coming from a graphic designer who was supposed to get a logo placed on Dogecoinstarter as a way to gain publicity. A significant haul, to be sure, but nowhere close to some of the multi-million dollar thefts that have hit the world of Bitcoin in recent months.

Since the Dogecoin universe is wrapped up in a feel-good sense of community and less focused on material gain than is Bitcoin, these sorts of predatory, small-time bad actors have the potential to do far greater harm to the overall project than similar scams affecting other cryptocurrencies.

Dogecoin is most notable for its insanely large transaction volume. According to BitInfoCharts.com, over the past 24 hours there were 108,038 Dogecoin transactions around the world, worth about $383,000,000 USD. To put that in perspective, all of the Dogecoins in existence are only worth a combined total of about $50,000,000. The flow of Dogecoins is far more rapid than for any other cryptocurrency.

The reason for this sky-high transaction rate is that an individual Dogecoin is nearly worthless, so users don’t think twice about giving them away as freely as a Facebook like or Reddit upvote. In fact, there’s a Reddit bot that allows users to automatically tip each other with minimal effort. The most high-profile outgrowth of this generosity was when Dogecoin users raised the equivalent of $30,000 USD to help send the Jamaican bobsled team to the 2014 Olympic Winter Games in Sochi, Russia.

However, if there’s a creeping sense this goodwill is being exploited, users will likely become less free with their Dogecoins. ?Every person hurt, every DOGE or BTC or LTC or whatever, stolen is a slap in the face and a punch in the gut to Cryptocurrencies as a whole,” wrote Reddit user goodshibe. ?You’re not just hurting one person, you’re damaging the credibility and stability of the whole thing. Little by little, chipping away and the foundation that so many have worked so hard to build.

In an effort to combat fraud within the community, some Dogecoin boosters have created r/dogecoinscamwatch, a subreddit dedicated to letting ?shibes,” a term of endearment for Dogecoin users, warn others about their bad experiences.

?The majority of the scams that we see are about shibes having their coins taken from them, usually while trying to purchase from USD to…[Dogecoin],” explained u/goodshibe, who is a moderator of r/dogecoinscamwatch. ?This [instance] was different in that it had a reasonably well-put together website behind it and was looking for donations toward creating a full-blown ?Kickstarter’ concept [for Dogecoin].”

One big problem is that, at present, there isn’t a simple way for people to convert Dogecoins directly into dollars, and vice versa, that’s mutually verifiable for both parties. Instead, they have to take the time-consuming intermediate step to going through Bitcoins or make a trade that could end up with the person on the site absconding their money. There are currently efforts underway to build such as system, but the current absence poses a significant problem.

There’s also the issue of the font. Pretty much everything that happens within the world of Dogecoin happens in Comic Sans. Typically, the Internet hates Comic Sans (as much as a collection of millions of people from around the world can be said to feel a specific way about any one thing), but the much-loathed typeface is used in the meme on which the currency was thematically based and it has since been adopted by users of the currency.

The problem with Comic Sans is that the font often makes it difficult to distinguish one letter or number from another. Scammers take advantage of this issue by creating a username that’s a slight variation from that of someone with a sparkling reputation within the community in an effort to steal that person’s identity. Without doing the requisite due diligence, newer shibes will often send their money (the custom is that the person will the least amountof ?cred” in a given transaction goes first) only to see the scammer never fulfill his or her end of the bargain.

Users have even gone as far as creating a Dogecoin blacklist as a way to identify scammers.

?We had an interesting scenario play out where someone tried to scam a user, got called out on it then admitted that they were only doing it because they had been scammed themselves,” u/goodshibe recounts. ?’You can make a pretty nice profit from it too’ was their self justification. That one’s pretty much the only one to really ‘shock’ me in a while. We’re a pretty easy-going, fun-loving community…generally we want to be able to trust one another. So this sort of negative spiral is exactly the kind of thing we want to nip in the bud as soon as possible.”

The most famous Dogecoin theft occurred on Christmas Day last year. A team of hackers going by the team #team-ooga compromised the security of online Dogecoin storage services Dogewallet and Instadoge, getting away with about 30 million Dogecoins. After the hack, community members rallied together to donate coins to victims of the attack in an effort called  Save Dogemas.

Similarly, others have taken up the mantle and are attempting to create something real where Dogecoinstarter.com was merely an illusion. ?Give us less than a week, we’ll have a Kickstarter style service for BTC, DOGE and LTC up and running. We also won’t ask you for a penny to get it off the ground,” wrote u/moolah in a recent post. ?This community can bounce back, it always does.”