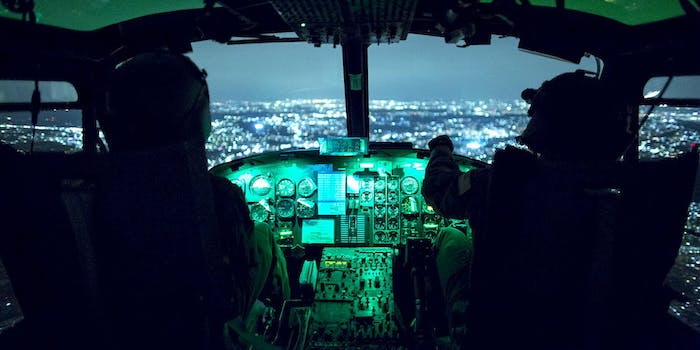 Flickr changed the DoD's photographs to 'public domain' over the weekend.

The United States Department of Defense has released the more than 11,300 images on its Flickr account into the public domain after initially posting them with a far more restrictive copyright license.

The licensing change comes after the Daily Dot noticed that the photos were improperly licensed and questioned the Pentagon about its Flickr licensing practices.

Under U.S. copyright law, all photos taken by federal employees in the course of their official duties are public domain and can be used for any purpose.

“Who knows how many people didn’t use these images because they were incorrectly marked.”

When the Daily Dot alerted the Pentagon to this issue, a spokeswoman said the DoD’s Web team would fix the licenses.

“The images on the Flickr site should be designated as ‘United States Government Work,’ which supports the provision set in DoD policy, and we will work with Flickr to make the change,” Lt. Col. Valerie Henderson, a Pentagon spokeswoman, told the Daily Dot.

Many of the photos carried a Creative Commons license, dubbed CC BY NC ND 2.0, that prohibited people from creating derivatives works (also known as remixes) or using the photos for commercial purposes.

This Oct. 3 photo of Marines conducting exercises in Arizona, for example, previously carried the incorrect license. It and the rest of the photo collection switched over to the public-domain license over the weekend, a few days after the Daily Dot first alerted the Pentagon.

Electronic Frontier Foundation activist Parker Higgins, who co-authors the weekly copyright-focused newsletter “5 Useful Articles” and regularly advocates for changes to U.S. copyright law, told the Daily Dot in an email that he is “glad to see the DoD corrected that error quickly when called on it.”

“Of course,” he added, “it would’ve been nice if they hadn’t made it in the first place. Who knows how many people didn’t use these images because they were incorrectly marked.”