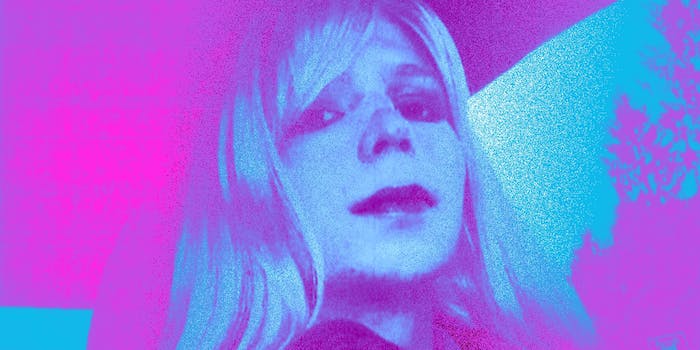 Chelsea Manning may be sent to civilian prison for gender treatment

She's reportedly the first U.S. military prisoner to make such a request.

The U.S. Department of Defense is working to transfer Chelsea Manning from a military to a civilian prison to assist in her gender transition, officials have said.

Manning was once an Army intelligence analyst named Bradley Manning who grew disillusioned with the Army’s moral authority in Iraq. Manning was arrested after leaking video footage of soldiers in a military helicopter slaughtering civilians—as well as a huge cache of other military documents—to WikiLeaks.

Manning is the first person to request transfer from a U.S. military prison to a civilian one to begin hormone therapy for gender dysphoria, the Guardian has reported. The civilian Federal Bureau of Prisons does provide such treatment.

In August, Manning was sentenced to 35 years in prison for violating the Espionage Act. The next day, she announced she was female. In April, a judge approved her request to legally change her name to Chelsea.

The U.S. military’s “Don’t Ask, Don’t Tell” policy on gay servicemembers, which allowed them to serve but not be open about their sexual orientation, ended in 2011. But it’s still ongoing for transitioning trans people in the military, who, as the Washington Post notes, are routinely discharged.

On Sunday, defense secretary Chuck Hagel described the military’s stance on trans soldiers as an “area we have not defined enough,” and called for regular review of the military’s policy toward them.