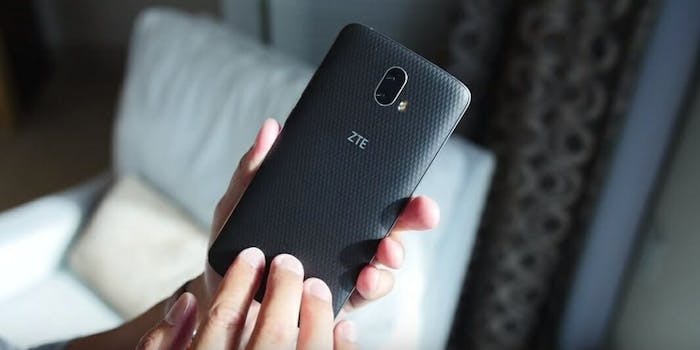 Donald Trump, though, has backed ZTE.

Despite Donald Trump’s continued support of Chinese telecom company ZTE, the intelligence chiefs from multiple U.S. agencies have warned Americans not to buy products from either ZTE or Huawei because of the belief they could help China spy on the U.S.

Now, the Democratic National Committee wants to make extra sure that all Democrats running for election aren’t using them either.

According to CNN, the DNC has told Democrats trying to win midterm elections not to use devices from either company. Apparently, one Democrat campaign was contemplating buying ZTE products, and that prompted a warning from Bob Lord, the chief security officer for the DNC.

“It’s very important that party and campaign workers not use ZTE or Huawei devices, even if the price is low or free,” Lord wrote, according to CNN. “… Please make sure that you are not using or purchasing ZTE or Huawei devices anywhere within your staff—for personal or work-related use.”

In February, FBI Director Christopher Wray testified in front of the Senate Intelligence Committee and said, “We’re deeply concerned about the risks of allowing any company or entity that is beholden to foreign governments that don’t share our values to gain positions of power inside our telecommunications networks … It provides the capacity to maliciously modify or steal information. And it provides the capacity to conduct undetected espionage.”

Huawei responded to that by saying, “Huawei is trusted by governments and customers in 170 countries worldwide and poses no greater cybersecurity risk than any ICT vendor, sharing as we do common global supply chains and production capabilities.”

ZTE also denied any wrongdoing. But U.S. companies were disallowed by the government from selling parts to ZTE after the company was found in 2017 to have violated sanctions with Iran. That ban was lifted after ZTE paid more than $1 billion worth of fines.