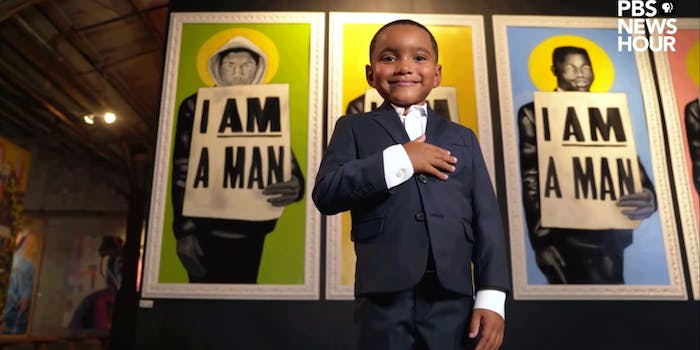 Trump claims Dems removed ‘God’ from Pledge of Allegiance at DNC. But that’s not really true

Trump made the claim, seemingly in an attempt to pander to evangelical Christian voters.

President Donald Trump on Saturday morning accused Democrats of removing “God” from the Pledge of Allegiance during the Democratic National Convention (DNC).

“The Democrats took the word GOD out of the Pledge of Allegiance at the Democrat National Convention. At first I thought they made a mistake, but it wasn’t. It was done on purpose. Remember evangelical Christians, and ALL, this is where they are coming from-it’s done. Vote Nov 3!” he wrote.

When Trump made the claim, Snopes had already debunked it, rating it as “mostly false.”

While at least two recitations of the Pledge of Allegiance omitted “under God,” those occurred at individual caucus meetings at the DNC, and the phrase was included at the start of each of the four nights on the national stage.

To debunk the claim, people began pointing to a video—in which Cedric Richmond Jr., the son of Rep. Cedric Richmond (D-La.), says “under God” during his recitation of the pledge on the final night of the DNC.

Snopes also found evidence of the phrase’s inclusion on nights one,  two, and three. The phrase was omitted during at least two individual caucuses and councils that were not nationally televised—the LGBTQ caucus meeting and the Muslim Delegates Assembly on Aug. 18.

The rumor that the DNC removed it was started well before Trump’s tweet, but his claim only exacerbated it, leading “God,” “under God,” and “Pledge of Allegiance” to trend on Saturday morning.