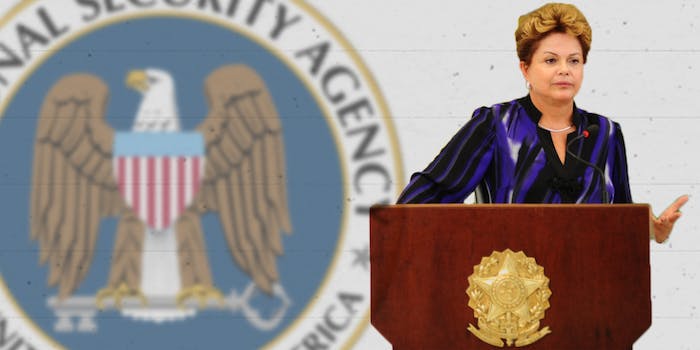 President Barack Obama has already called for an investigation.

Brazilian President Dilma Rousseff, furious at allegations that the National Security Agency spied on her, has cancelled her upcoming diplomatic trip to the United States.

She made the announcement Thursday, the same day that the European Union Parliament commenced a hearing on whether the NSA unlawfully spied on EU leaders and citizens.

Brazilian foreign minister Luiz Alberto Figueiredo called the spying “an inadmissible and unacceptable violation of Brazilian sovereignty” on Monday. At the time, he hinted that it might lead to Rousseff canceling her trip.

Mexican president Enrique Pena Nieto, who was similarly targeted by the NSA, said Thursday that U.S. President Barack Obama had promised him a “thorough investigation.”

Nieto also said that he will address the issue with Obama during the current G20 meeting, where all three presidents are meeting in Russia.

UPDATE: Rousseff met with Obama one-on-one and told reporters he has taken responsibility for what happened. She’s now considering continuing with her trip to Washington after all.