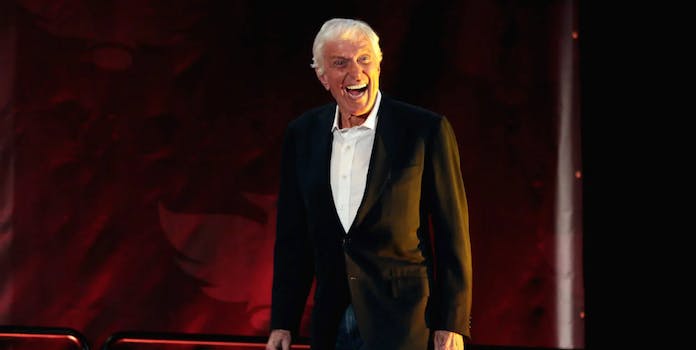 He's still got moves at this age.

The 94-year-old actor and dancer strutted around the stage at the L.A. Convention Center after some confusion as to who would be following him up on the stage.

“He’s on his way, is he on his way,” Van Dyke can be heard saying in a video obtained by TMZ.

Van Dyke twirls his hips and hands, entertaining the crowd as he tries to figure out who is suppose to be joining him on stage.

“I’m not introducing him,” Van Dyke says to the crowd. “Who’s up next? Am I up here by myself?”

It an attempt to keep the crowd amused, Van Dyke also broke out in song, singing “we love you Bernie, oh yes we do,” before eventually being joined on stage by his wife.

The crowd seems to have enjoyed it, yelling “we want Dick.”

Video of the actor’s performance quickly made its way to the internet.

“We want a dick chants at Bernie’s rally calling for Dick Van Dyke,” one user wrote.

Van Dyke announced his support for Sanders in late February.