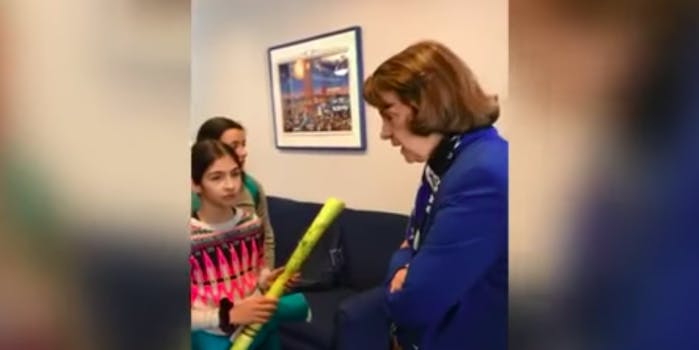 A viral video highlights the divide on how to deal with climate change.

The Sunrise Movement’s two-minute-long edited video was posted to Twitter is certainly damning—Feinstein appears dismissive and condescending to the children. The original video was posted to the Sunrise Movement’s Bay Area chapter’s Facebook page. Even though the longer version provides a little more perspective on the encounter, Feinstein’s dismissal of the children’s request shows the generation gap in views on climate change.

When a group of children visited Sen. Feinstein’s office on Friday asking her to vote for a resolution on Rep. Alexandria Ocasio-Cortez’s Green New Deal, Feinstein said: “You come here and you say, ‘It has to be my way or the highway.'”

”I’ve gotten elected, I just ran, I was elected by almost a million-vote plurality and I know what I’m doing,” she says in the video.

Feinstein then moves to talk about her own bill on environmental policies, which she believes has more of a chance to pass the GOP-dominated Senate. When one kid told the Senator that “we’re people who voted for you, you’re supposed to listen to us,” Feinstein retorts that they’re too young to have done so.

After the video went viral, Sen. Feinstein was criticized for being condescending to the children but after the full video of the encounter was released, some watered down their criticism. The edited video of the encounter, published on the Sunrise Movement’s Facebook page, is a bit over two minutes long and, according to some people on social media, “selectively shows the worst parts of the exchange.”

Thanks to the commenters who posted a link to the entire video. The edited version does selectively show the worst part of the exchange. I acknowledge that having complete info and context is important, and you can find full video here 1/ https://t.co/r24QfCQLW4

Having watched the whole video several times with an open mind, I still don't think this was handled well. I'm sure that the Senator is right in that she has a bill that has a better chance of succeeding. But an important part of civic dialogue is an opportunity to be heard 2/

Especially given that she is not in favor of the other position, approaching the issue with some curiosity — "What are the issues that worry you most?" — is a chance to move the conversation from an antagonistic stance to common ground. 3/

I think she missed that opportunity (she literally didn't ask a single question). You can disagree. But sometimes the truth is in the middle: The edited video was unfair but her approach was not entirely receptive, either. Countering one extreme with another isn't productive. END

In the longer video, Feinstein conceded that she may vote for a proposal, and even offered one young woman an internship in her office.

Another Tweet says the video was “crafted by the Sunrise Movement who backed Feinstein’s opponent in the election.”

Hey everyone falling for a heavily-edited video of Feinstein!

It was crafted by the Sunrise Movement who "backed" Feinstein's opponent in the election.

We now live in a time where elections are illusory. If you don't win a the polls, you try to seize the seat.

Another user said, “Yes, at times she is irritable but it’s directed at the adults talking over the children.”

Watch the full Feinstein video before you spout your fake outrage please. Yes, at times she is irritable but it’s directed at the adults talking over the children. How about we save our outrage for babies in cages or kids slaughtered in school? https://t.co/Y8tZkGoirQ

Stephen O’Hanlon, a spokesperson for the Sunrise Movement, told the Daily Dot in an email, “The full video tells the same story, and we hope everyone watches it.”

“Senator Feinstein looked a room full of children in the eyes and told them that she does not support the only plan that will provide them a livable future.”

Sen. Feinstein, in a statement released on Friday, said, “I want the children from the Sunrise Movement to know they were heard loud and clear. I have been and remain committed to doing everything I can to enact real, meaningful climate change legislation.”

I want the children from the Sunrise Movement to know they were heard loud and clear. I have been and remain committed to doing everything I can to enact real, meaningful climate change legislation. pic.twitter.com/JLoIMDf26u

Not only does the Green New Deal divide Democrats and Republicans, but the encounter with Feinstein also portrays a greater generational gap between older and younger members of Congress.

The Green New Deal, an initiative taken by Democratic rising star Alexandria Ocasio-Cortez, is a series of aggressive proposals intended to fight and reverse the effects of climate change and environmental degradation, as well as reduce income inequality, enhance worker protections, and create millions of jobs.

Yup. If you don’t like the #GreenNewDeal, then come up with your own ambitious, on-scale proposal to address the global climate crisis.

Until then, we’re in charge – and you’re just shouting from the cheap seats. https://t.co/h3KSJhHqDN

Proponents of the Green New Deal include newly elected representatives such as Rep. Rashida Tlaib (D-Mich.), Rep. Ayanna Presley (D-Mass.), and Rep. Ilhan Omar (D-Minn.) – and a handful of other progressive members of Congress.

With climate change deniers in Washington obstructing real solutions to the imminent crisis facing our planet, states like MN must lead the way forward on a #GreenNewDeal.

Our environment and our communities can't wait!https://t.co/70qpP5HB2H

Sen. Feinstein, a veteran legislator who has been in the Senate since 1992, said there is no money to pay for the plan, and echoes some of Speaker of the House Nancy Pelosi (D-Calif.) criticism of the plan.

“The green dream or whatever they call it, nobody knows what it is, but they’re for it right?” Pelosi told Politico in February.

While Pelosi is more supportive of the initiative, she calls the plan a “suggestion.”

Paul Bledsoe, a strategic adviser at the Progressive Policy Institute told the Hill such an ambitious climate plan may do more harm than good for the global battle against climate change.

“I understand the value of aspirational goals,” he said. “My personal view is, that undermines the credibility of the effort.”

On Friday evening, Feinstein’s aides released portions of her proposal, which echo Obama-era environmental policy goals, like respecting the Paris climate accord, and a commitment to renewable energy by 2050.

The Sunrise Movement said of Feinstein’s proposal: “Putting forward her own, watered down, resolution is out of line with what UN scientists say is necessary and divides Democrats and distracts from the momentum of Rep. Ocasio-Cortez and Sen. Markey’s resolution.”

The Senate vote on the resolution could take place as early as next week, according to the Hill.