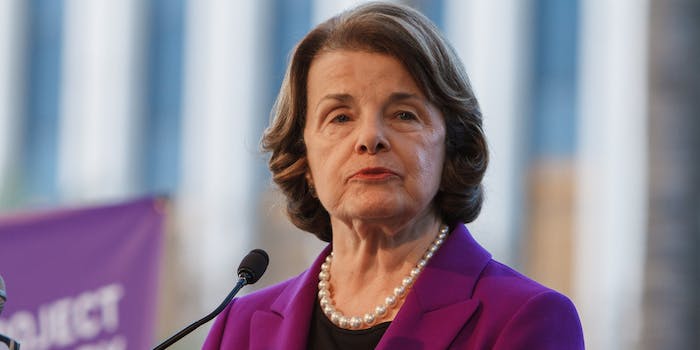 Dianne Feinstein (D-Calif.), the top Democrat on the Senate Intelligence Committee, has renewed her call for Internet censorship by targeting that classic mischief manual, the Anarchist Cookbook.

After the FBI announced Thursday that it had arrested two women, Noelle Velentzas and Asia Siddiqui, for planning to bomb targets on U.S. soil, Feinstein seized her chance to blame the Anarchist Cookbook and other manuals that contained detailed instructions for building improvised explosive devices.

“I am particularly struck that the alleged bombers made use of online bomb making guides like the Anarchist Cookbook and Inspire Magazine,” she wrote in a press release on her website, referencing al Qaeda‘s English-language publication. “These documents are not, in my view, protected by the First Amendment and should be removed from the Internet.”

While Velentzas did use the Anarchist Cookbook while planning her Islamic State-inspired attack with Siddiqui, it was, as Intercept reporter Dan Froomkin noted, an undercover FBI agent who first introduced her to the book.

This is far from the first time that Feinstein has publicly fretted over bomb-making information being publicly available. Criminalizing such material has been a focus of hers since 1995, when she campaigned to make the distribution of bomb-making manuals illegal.

After the 1995 Oklahoma City bombings, Congress debated and, in 1997, adopted a Feinstein-sponsored amendment making it illegal to disseminate bomb-making instructions with the intent to spur “a Federal crime of violence.”