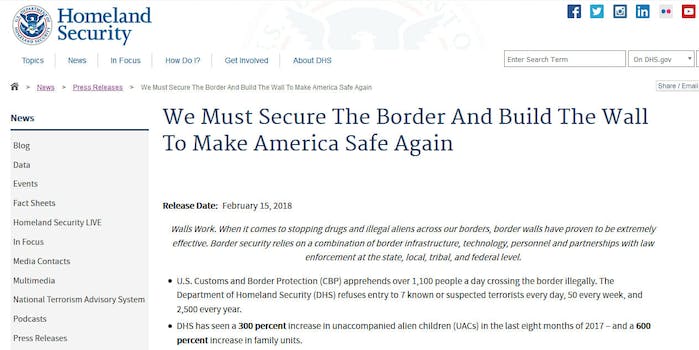 Did this DHS press release mimic a neo-Nazi slogan?

There is a lot of speculation online.

Social media users are accusing a months-old press release from the Department of Homeland Security (DHS) of mimicking a slogan used by neo-Nazis.

The release, from February, comprises 14 words—a number that from a phrase used by white supremacists—to headline a press release about securing the United States border and the wall proposed by President Donald Trump.

“We must secure the border and built the wall to make America safe again,” the release’s headline reads.

The “14 words” slogan was coined by David Lane, a white supremacist who was a member of the a group called The Order, according to the Anti-Defamation League. It references the popular white supremacist slogan: “We must secure the existence of our people and a future for white children.”

The first few lines of the press release match identically.

The press release uses a number of statistics to defend Trump’s plan to build a wall. One of the statistics—”On average, out of 88 claims that pass the credible fear screening, fewer than 13 will ultimately result in a grant of asylum”—also caught the attention of social media users, who pointed out that “88” is also a code for “Heil Hitler,” H being the eighth letter of the alphabet.

The similarity between the white supremacist slogan and the DHS headline (and the number of words in each one) was noticed by social media users and immediately led to speculation and accusations of the DHS being supportive of white supremacist views.

This is an actual story on an official government website with a 14-word headline starting with "we must secure". This is not an accident. There are actual Nazis-who-call-themselves-Nazis at DHS. https://t.co/Q01TRRpNaI

DHS just released its own 14 words to justify building the wall. If you weren't comfortable calling .@POTUS a Nazi before, feel free to do so from here on out.

People need to know that DHS snuck a 14 words meme into an official press release. 14 words and 1488 are neo Nazi code.

Some, however, objected to the generalizations made, noting that the 88 percent statistic was legitimate.

In re: the viral DHS post: the article only has 13 bullet points (not 14) and the 88 appears to be working off the fact that 88% of applicants pass their credible fear interview. (But a far lower percentage are granted asylum) https://t.co/dYKXM8HkMM

DHS did not immediately respond to a request for comment by the Daily Dot. However, when contacted by Law & Crime, the DHS declined to comment on the record.