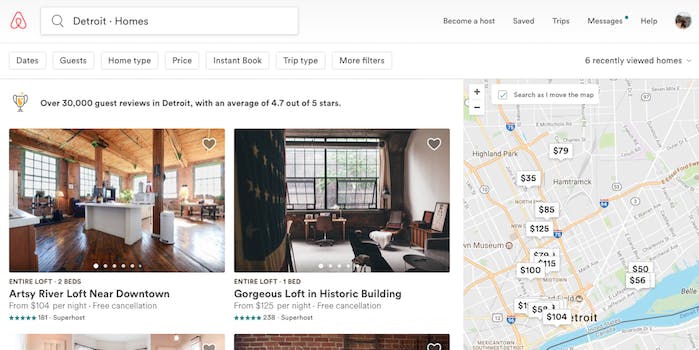 A new zoning ordinance won't be enforced after all.

A number of Detroit residents were in shock this week when the city quietly banned Airbnb, as part of a new zoning ordinance. Area hosts received notices alerting them that the city has prohibited Airbnb for areas zoned for single family homes and duplexes—exactly where a majority of the city’s Airbnb’s are located.

The text of the ordinance states that “use of a dwelling to accommodate paid overnight guests is prohibited as a home occupation.” According to Curbed, the ordinance, originally passed in 2017, went into effect this week.

Airbnb commented on the situation, saying, “We’re very disappointed by this turn of events. Airbnb has served as an economic engine for middle-class Detroiters, many of whom rely on the supplemental income to stay in their homes. We hope that the city listens to our host community and permits home sharing in these residential zones.”

After decades of success as the center of America’s industrial efforts, by the early aughts, Detroit had all but turned into a ghost town as its once glittering manufacturing facilities closed shop and citizens abandoned the city for economic opportunity elsewhere. Detroit filed for bankruptcy in 2014.

The city has been recovering in recent years, and the presence of Airbnb likely hasn’t hurt. According to data from the company, in 2017 there were 430 active Airbnb hosts in the town accommodating a total of 47,000 visitors. Airbnb hosting helped the average Detroit host earn an extra $6,600 annually.

The about-face was also interesting because Detroit’s mayor once had a spot in a video promoting the benefits of Airbnb.

However, on Friday, the city announced a decision not to enforce the new anti-Airbnb rule. In the Detroit Metro Times, David Bell, Detroit’s director of the Buildings, Safety Engineering, and Environmental Department, issued a statement that “the rules weren’t meant to prohibit overnight guests.” City planning officials said that the update was only meant to be a “housekeeping matter,” and that a broader ordinance specifically looking at Airbnb units is in the works. In the meantime, the city’s law department is now reviewing the current ordinance, and Airbnb hosts will not be ticketed.