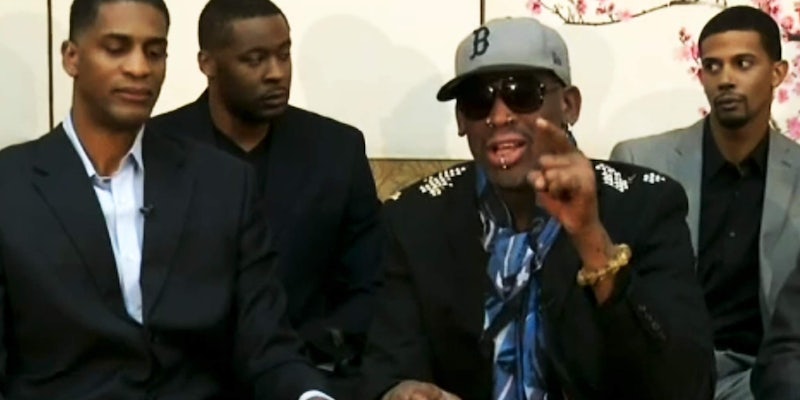 Dennis Rodman's on another goodwill tour of North Korea, improving global relations one basket at a time!

Once again, Dennis Rodman is shooting hoops in North Korea. This time he’s doing it to celebrate his best friend Kim Jong Un’s 31st birthday. Well, maybe. The actual year of Kim’s birth is apparently up for debate. North Korea says Kim was born in 1982, but Rodman and South Korea say it’s 1983—nevermind.

This time Rodman brought new entourage of old NBA basketball delegates with him on his visit to his favorite totalitarian destination. For some reason, who these retired players are doesn’t seem to be generating much press, but according to the Associated Press they are Kenny Anderson, Cliff Robinson, Vin Baker, Doug Christie, Charles D. Smith. Four other guys, described only as “streetballers” also tagged along.

There’s kind of a dark cloud hanging over Rodman’s vacation, however. Many reporters have speculated this somehow connected to the fact that his host, Supreme Leader Kim, is a complete and total psychopath.

But Rodman’s not about to let anyone put a damper on his big day on the court. Certainly not Chris Cuomo, who on CNN Tuesday attempted to question the off-beat star’s motives for making the trip in the first place while speaking to him live from Pyongyang. Cuomo wound up squaring off with Rodman, who appeared to be impersonating a professional wrestler.

Of course, it’s Cuomo fault. He stepped out of line when he asked Rodman about the welfare of Kenneth Bae, an American citizen who’s been held prisoner in North Korea for over a year. “If you can help Bae, will you take the opportunity?” Cuomo asked.

“If you understand with Kenneth Bae did. Do you understand, what he did in this country?” Rodman responded. Quick with his mic, Cuomo pointed out that no one knows what Bae did because no charges against him have ever been announced.

According to Bae’s mother, who was given permission by North Korea to fly in and visit with her son for a total of a 6 hours, his health is quickly deteriorating while under the care of nation’s doctors.

“I don’t give a rat’s ass what the hell you think,” Rodman informed Cuomo in the midst of the interview. “I’m saying to you, look at these guys here, look at them… they dared to do one thing, they came here.” The gentlemen behind Rodman seemed to grow increasingly uncomfortable as the interview dragged on.

At one point, a player tried to cut Rodman off, to which he replied, “Ain’t no shill… let me do this.”

While Cuomo’s concerns doesn’t carry much weight with Rodman, there is one man he perhaps should have listened to. Shin Dong-hyuk voiced his concerns over Rodman returning to North Korea days before the trip. Shin is also known as the one person who escaped from the infamous North Korean Kaechon slave-labor camp—where he was born.

Sunday, Shin wrote on Facebook, “If this trip were to happen and Dennis Rodman’s goals are realized, then all the sports of the world—and those who support sports, should weep and be sad for something pure like sports to be used and manipulated for a dictator’s fun and pleasure.”

Shin went on to compare Rodman’s team to athletes who were excited about being in Germany during the 1936 summer Olympic games. “However soon afterwards, countless number of Jewish people were massacred in the genocide, and countless number of people suffered,” Shin wrote, in a failed attempt to get his followers to somehow stop Rodman attending Kim’s birthday bash.

Rodman’s visit is likely just what his best friend Kim needed to cheer him up. A few weeks ago, the dictator suffered a death in the family when he had his uncle Jang Song Thaek killed.

There were widely circulated reports that the Jang and his closest aides were fed alive to a pack of starved dogs. However, this appears to have been greatly exaggerated. In reality, no one’s quite sure how Uncle Jang met his end. The only news we have received from the hardworking journalists at the Korean Central News Agency is that the 67-year-old admitted to being a big-time pornographer shortly before he was executed.