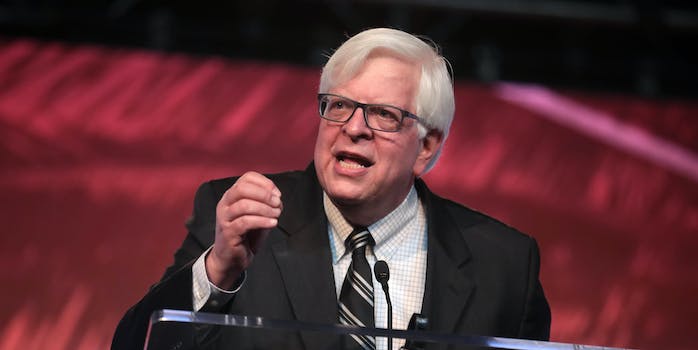 He clearly misses it.

Dennis Prager is very upset that he’s not allowed to say the N-word anymore.

Yesterday on the Dennis Prager Show, he railed against the taboo on using the racist slur for Black people. He blames liberals.

“The left has made it impossible to say the N-word any longer,” Prager whined.

“It’s disgusting. It’s a farce. It’s the only word you can’t say in the English language.”

The clip begins with Prager saying he “doesn’t believe that there is a hatred of Jews and Blacks in the United States.”

A caller then asks why Prager previously used a slur for Jewish people, but didn’t say the actual N-word.

He responds that this is because “the Left” has made it impossible to say the N-word, but it “doesn’t give a damn about” the k-word.

In spite of the fact that the Republicans control the majority of state legislatures, as well as the federal executive branch, half of the legislative branch, and, increasingly, the judiciary, Prager somehow believes that liberals control America.

“The left run the culture and the country,” he says. “The Republicans have the Senate and the presidency and that’s very important.”

The clip tweeted by Media Matters researcher Jason Campbell ends with Prager making a bizarre differentiation between using the N-word and referring to someone with it.

“It is idiotic that you can’t say the N-word. Idiotic,” he says.

“Of course you should never call anybody the N-word, that’s despicable.”

Reactions were as expected. Fans of the founder of conservative propaganda machine PragerU cheered him on; others were appalled or used it as an opportunity to dunk on him. A few suggested that he try using the word in a predominantly Black neighborhood.

“Since when was racism offensive?” one man quipped ironically.

Prager also likely knows he’s free to use it if he wants.