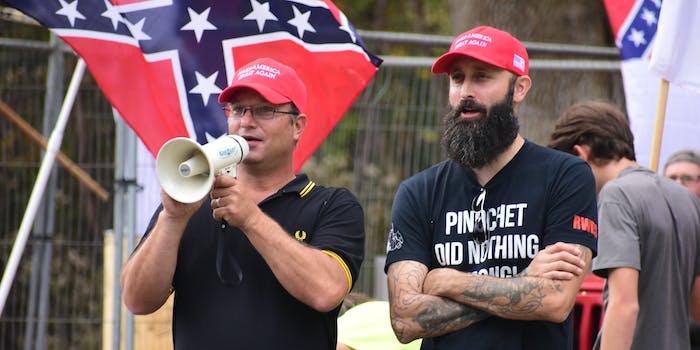 The extremist group the Proud Boys doesn't appear to be behind the messages, which the FBI is investigating.

Update 6:37pm CT: In a press conference Wednesday night, the FBI announced that the emails spoofing the Proud Boys were conducted by Iran.

Additionally in the press conference, the FBI announced that voter information had been obtained by both Iran and Russia, which could be used to contact voters, like the people reached by the Proud Boys emails.

According to the FBI, Iran is also sending videos about fraudulent ballots. The FBI said they had not seen any action from Russia.

On Tuesday, registered Democrats in several states received ominous emails demanding they register as Republicans and vote for President Donald Trump. The emails were purportedly addressed from the Proud Boys.

However, the group denies sending them.

“We are in possession of all your information. […] You will vote for Trump on Election Day or we will come after you,” the emails said. They included the voter’s physical address.

Democrats in Florida, Alaska, Arizona and Pennsylvania received the emails, the Washington Post reports. All but Alaska are considered swing states in the presidential race.

The Proud Boys deny being behind the threatening messages. Enrique Tarrio, chairman of the right-wing extremist group, told the Post that the Proud Boys have two websites and have been migrating away from the URL on the emails. He said that site had recently been dropped by Google Cloud services.

The Post reports that Google confirmed Tarrio’s claim that the website was recently dropped from its hosting service, which left it unsecured and vulnerable to hijacking of this nature.

The Florida sheriff said that they believe the emails are fraudulent and were not sent by the Proud Boys.

The Proud Boys, which the Southern Poverty Law Center labels a hate group, have long maintained that they are neither a hate group or racist as many claim. The group participated in the Unite the Right rally in 2017, and has been accused of violence and making threats. In 2018, Facebook banned it under its policies governing hate speech and hate groups.

Some have claimed that the emails originated in a foreign country. Vice reports that the headers’ client-IP address suggests they came from Estonia. Both the Post and CNN found a possible path through a server in Saudi Arabia.

If true, the emails could be an attempt at foreign election interference, which for many calls to mind the last presidential election. There is no evidence at this time that Russia, which interfered in the last election, is behind these emails.

In a statement sent to Florida press on Wednesday about the emails and other election interference tactics being reported in the state, the Biden campaign decried what it called voter intimidation.

“Our country stands for freedom, liberty, and democracy, and these scare tactics have no place in our state. It’s clear that those running scared will try anything in the closing weeks of the election. There are no excuses for this behavior.”