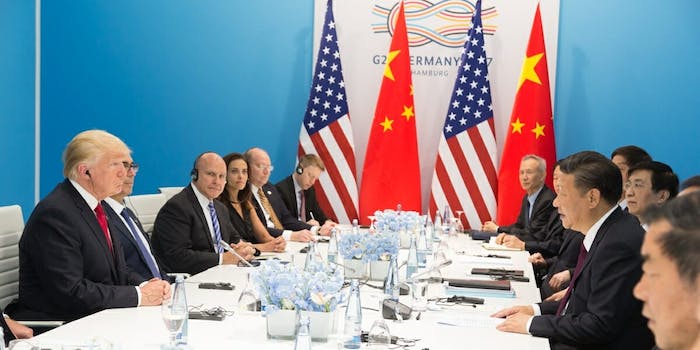 China had just approved a huge loan to Trump-branded projects.

ZTE, which develops phone and network components, was banned by the Department of Commerce for violating U.S. sanctions and selling to Iran and North Korea. When U.S. companies were banned from selling products to ZTE, the company began to severely struggle. That was, until Trump stepped in to lift the ban.

Senator Schumer and Obama Administration let phone company ZTE flourish with no security checks. I closed it down then let it reopen with high level security guarantees, change of management and board, must purchase U.S. parts and pay a $1.3 Billion fine. Dems do nothing….

…but complain and obstruct. They made only bad deals (Iran) and their so-called Trade Deals are the laughing stock of the world!

Sunday’s letter addressed to David Apol, head of the federal ethics office, was signed by more than 60 representatives and published by Rep. David Cicilline (D-R.I.) and demands that Trump answer questions about the timing of his decision.

Cicilline tweeted that the call for an investigation was prompted by the timing of Trump’s intervention to save the company. It came just days after the Chinese government announced a $500 million loan for a Trump-branded real estate project, including an Indonesian theme park that will facilitate his hotels and a golf course.

NEW: Will be sending this letter with more than 60 colleagues to demand an ethics investigation into @realDonaldTrump advocating for a Chinese company just days after China’s government gave his company a $500 million loan. pic.twitter.com/EC2fbjz4gr

“The Trump administration has yet to give a satisfactory answer about the reason behind and the appropriateness of making concessions to ZTE, a Chinese company that illegally sold U.S. technology to hostile regimes,” the Democrat letter reads. “The Trump administration has also completely failed to address the suspicious timing between this policy reversal and the Chinese government’s loan to a Trump-linked project.”

The president still holds a stake in his old businesses due to a revocable trust, which allows him to draw funds and earn profits through his company’s successful projects or investments.

Additionally, according to the New York Times, first daughter and White House advisor Ivanka Trump’s seven trademark applications went through either side of the president’s announcement to save ZTE, five before and two after. The Times reported that the application, submitted in 2017, was pushed through unusually fast.

Trump’s intervention for the Chinese firmly put him at odds with leading lawmakers from both parties in Congress and even his own cabinet.