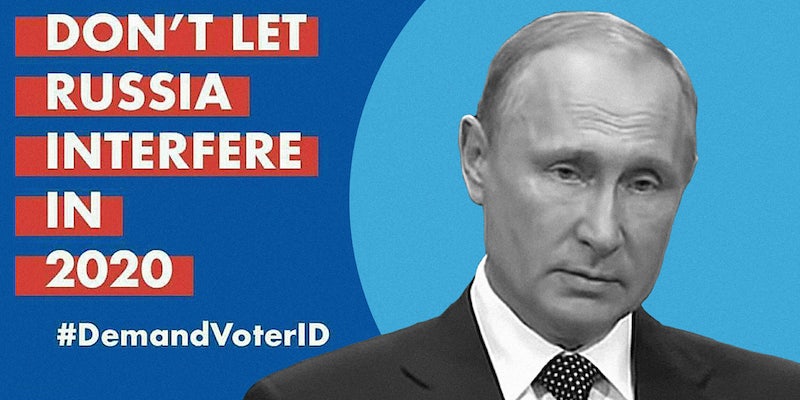 There's levels to this.

Yesterday, liberals were outraged that President Donald Trump, in his press conference with Vladimir Putin, refused to condemn Russia for meddling in the 2016 election.

Twitter was flooded with the hashtag #DemandVoterID and memes featuring Trump and Putin.

The majority of the memes were circulated on Reddit clone Voat six months ago. Now, they’ve resurfaced as Russian election interference is back in the news—in advance of Trump’s summit with Putin, Special Counsel Robert Mueller indicted 12 Russians for illegally accessing DNC and Hillary Clinton campaign emails during the election.

On the face of it, the meme seems like a convincing argument, which is what makes the prank work. Russian agents attempt to interfere with the election. If only verified U.S. citizens can vote, the problem is solved.

But conservatives pushing it know that voter ID laws unfairly target minorities and low-income voters, who have a tendency to vote Democratic. Voter ID laws can prevent people who can’t afford to pay a speeding ticket from voting, or stop people who can’t spend a day at the DMV from casting a ballot.

It’s a movement that would help Republicans tremendously. In pushing it as a joke for Democrats to try and adopt, they are hoping the party sabotages themselves.

But by doing so, they are also referencing the things that they are loathed to admit. The president has been adamant in a few things: that he didn’t collude with Russia and that Russian interference (if it even existed) in 2016 did nothing to alter the vote totals.

But the memes don’t reflect that.

If there is a necessity for voter ID laws in response to whatever happened 2016—even if those on the right are saying it’s just a prank to own the libs—it’s also a fairly blatant admission that Moscow did have an impact on Trump’s candidacy.