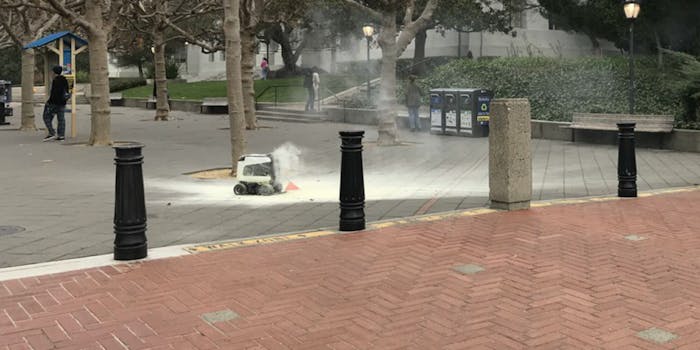 A candlelight vigil was even held for the fallen bot.

Be warned, the future of food delivery isn’t fire-proof. An automated bot at the University of California, Berkeley suffered an explosive death thanks to a faulty battery on Friday.

The deceased is better known as a KiwiBot, one of over 100 delivery robots that are in operation around campus. Students, faculty, and staff regularly order food through the service, which is part of UC Berkeley’s SkyDeck program supporting startups.

Unfortunately, the brave KiwiBot passed away in the line of duty after a “defective battery was put in place of a functioning one,” causing thermal runaway, the company Kiwi said in an official public statement.

When the robot ended up smoldering and catching fire, an onlooker reportedly “acted swiftly to extinguish the flames using a nearby fire extinguisher,” and the Berkeley Fire Department “doused the robot with foam ensuring there was no risk of re-ignition,” Kiwi said in its statement.

Luckily, no one was hurt, although a couple students scored some smartphone footage of the entire ordeal.

Something you don’t see every day: KiwiBot blows up on Sproul Plaza. A Berkeleyside reader shared this photo. Read about the bots in past coverage: https://t.co/nQn2o8gVxJ pic.twitter.com/RaXCvRDuSG

so a delivery robot caught fire on berkeley's campus and students set up a candlelight vigil for it pic.twitter.com/alen7vF7Ho

Interestingly enough, thermal runaway is the same issue that plagued the Samsung Galaxy Note 7’s replacement batteries, causing them to simultaneously combust. Kiwi already has a fix in place—the company pulled its robots from service and developed custom software to monitor their battery levels. But that hasn’t stopped the KiwiBot’s death from reaching YouTube.

One clip shows the delivery robot letting off black smoke as flames flicker across its back and right side. It’s clearly a much bigger fire than the “smoke and minor flames,” Kiwi says in its statement.

Students have since been mourning the poor KiwiBot, calling the fallen delivery bot a “hero” and “legend,” the Daily Californian reports. There was even a candlelight vigil set up where the bot met its demise.

Glad nobody was hurt. Expect to see more stories like this with the growth of autonomous vehicles, drones, and robots.

Some suggested the explosion is a feature, not a bug.

Your flame grilled chicken is done. Now could you kindly put me out…

The robot just wants to rest. So it self destruct. (lol jk)

In lighter news, the late KiwiBot wasn’t carrying any food at the time. So don’t worry, no one’s lunch was ruined by his sudden departure.