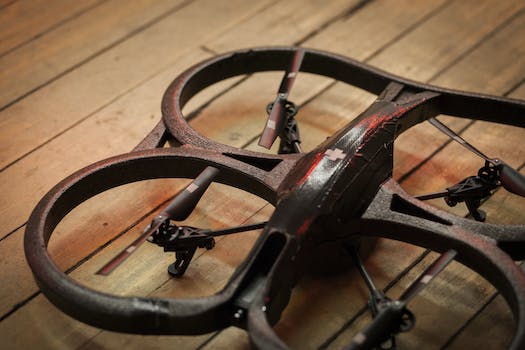 We were only just getting over our fear of falling air conditioners.

Overworked and underpaid, the New York food delivery guy is a truly heroic archetype. He bikes through punishing rain and snow, dodging manic cabbies and garbage trucks, all for our convenience—and someday soon, he might just salvage your very expensive flying toy.

That appears to be what happened on the Upper West Side on Friday evening, when a drone dropped out of midair and into the intersection of 61st Street and Columbus Avenue, its GoPro camera still recording. Radio producer Jody Avirgan was on the scene and tweeting.

Just witnessed my first ever NYC drone crash, came down on the sidewalk on Culumbus/61st by this delivery guy. pic.twitter.com/EJrUUZzXqg

What are the ethics of caring for a downed drone? The go-pro on it was still filming, we pointed it at the delivery guy's phone number.

What a conundrum. How often does $1000 of electronics just plummet at your feet? Hopefully the go pro was transmitting back to the owner.

Eventually, the rescue crew found a phone number on the device and dialed it. The delivery guy passed the drone off to the owner of a halal truck, then vanished back into the urban maze of Manhattan. (There’s no time for accolades when mozzarella sticks are on the line.)

They found owners number on blade, halal guy is holding it, delivery guy should get $, I follow @mikiebarb : @jodyavirgan

@sternaa @grynbaum nice! Glad to hear he's safe, wonder if he got the white sauce and the hot sauce.

As drones become more available and affordable, accidents in densely urban areas like New York will likely increase. In May, a drone operator was fined $2,200 by the FAA for an incident in which his remote-controlled helicopter plummeted to a sidewalk near Grand Central Station, nearly striking a pedestrian who then removed its video card as evidence.

Last summer, moreover, two men were arrested for allegedly piloting drones into the path of an NYPD helicopter near the George Washington Bridge. And this holiday season saw a promotional, mistletoe-laden drone slice a photographer’s nose open at a Brooklyn TGI Friday’s location. The takeaway? Well, it’s like UFO believers say: Keep watching the skies.