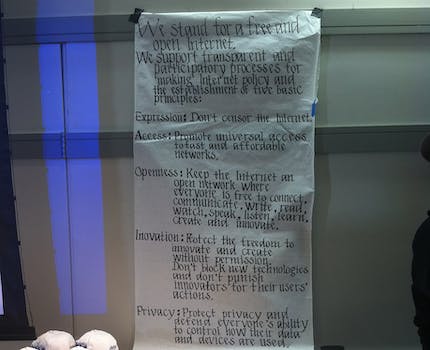 The four members of the House of Representatives who have come out in support of open Internet are all up for re-election.

According to the New York Times, 81 of the House of Representatives’ 432 available seats could go either way in 2012.

Among those safe, though, are the four House members who have signed the Declaration of Internet Freedom, a five-point document, created in July by some of the Internet’s best-known activists, that pledges support for a free Internet.

Their reasons for signing it are as varied as the areas they represent. Anna Eshoo (D-Calif.), has represented Silicon Valley since 1992, and that area’s economy clearly depends on the Internet. Ed Markey (D-Mass.) signed it while trumping his credit as the author of the country’s first net neutrality bill. Darrell Issa (R-Calif.) has tried to crowdsource his own Digital Bill of Rights. He and Jared Polis (D-Colo.) are among the 10 richest members of Congress, and both made their fortune as online entrepreneurs.

These candidates disagree on plenty of other issues. Markey, for instance, is a strong supporter of the Affordable Care Act, touting the effectiveness of a similar statewide program in Massachusetts. Issa, on the other hand, has repeatedly demanded the repeal of Obamacare.

But when it comes to the Web, the four stand united.

“It boggles the mind,” Eshoo told the Daily Dot, “why anyone would be opposed to an open and free Internet.”

However, she noted, “there are many commercial interests that lobby Congress whose business model does not lend itself to a free Internet.”

Indeed, the answer to why these four have stood up to the copyright lobby might be at the end of the money trail. Each were united in opposition to the Stop Online Piracy Act (SOPA), a bill designed to fight Web piracy but carried the potential to shutter any website where users could freely post links that might link to copyrighted content. The entertainment industry unabashedly lobbied for SOPA and notoriously threatened to cut lobbying money to candidates who voted against it. But for the four Representatives who signed the Declaration, there wasn’t much money to cut.

According to figures provided by Maplight.org, each received minimal lobbying money from the recorded music and motion picture industries since 2006. Issa has received the most out of the four, with a combined $6,250. But that’s pocket change compared to SOPA author Lamar Smith (R-Texas), who has received a combined $123,550 from entertainment lobbyists since 2011, or SOPA supporter Howard Berman (D-Calif.), who represents the area around Hollywood and who has taken $142,910 from the movie industry since 2006.

That may explain why those four could unite on a copyright bill but disagree on the Cyber Intelligence Security Protection Act (CISPA), which passed the House in April and whose vote fell more along party lines. CISPA would make it easy for websites under attack to bypass privacy restrictions and hand over information to government agencies. It has been heavily criticized by online privacy advocates. Though the three Democrats who signed the law opposed CISPA (Polis and Markey, in particular, stumped against it), Issa argued that the bill was both vitally necessary and amended enough to afford enough privacy.

The day might come when every politician feels compelled to sign the Declaration of Internet Freedom, and since it’s non-binding, it could become effectively toothless. But for now, at least, it’s a litmus test of at least one thing: politicians who are willing to oppose the copyright lobby when it threatens the Internet.

Photo of the Declaration of Internet Freedom via @SwagLocal/Twitter