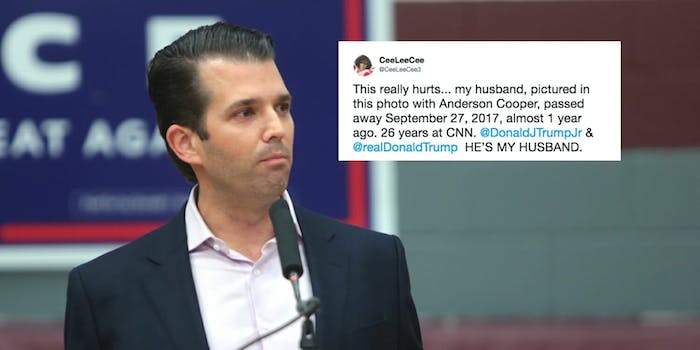 Wife of deceased CNN employee asks Trump Jr. to not use his photo for ‘meme’

Douglas Thomas passed away a year ago.

The wife of CNN crew member Douglas Thomas pleaded to Donald Trump Jr. via Twitter on Wednesday to stop using an old image of her deceased husband to push a right-wing conspiracy theory.

The image is 10 years old, taken when Hurricane Ike hit Texas in 2008, but was circulated and misrepresented by Trump Jr. on Sunday to attack CNN.

News anchor Anderson Cooper can be seen in the picture standing waist-deep in flood water several feet in front crew member Thomas, who is in much shallower water.

In his tweet the president’s son accused the the network of “lying” about the severity of Hurricane Florence to make President Donald Trump “look bad.”

It’s a shame that CNN’s ratings are down 41%. What’s worse is there’s a simple solution that they refuse to accept. Stop Lying to try to make @realDonaldTrump look bad. https://t.co/O3XyWchsJh pic.twitter.com/BCUCxKnOvO

Thomas’ wife tweeted that the use of the image was “disrespectful” and explained that her husband, an experienced sound technician and video editor who worked 26 years for CNN, had passed away in September 2017.

This really hurts… my husband, pictured in this photo with Anderson Cooper, passed away September 27, 2017, almost 1 year ago. 26 years at CNN. @DonaldJTrumpJr & @realDonaldTrump HE’S MY HUSBAND. https://t.co/7tYmqFgYjW

Dear @DonaldJTrumpJr
Please STOP tweeting things like this. The gentleman in the photo with Anderson is MY HUSBAND who passed away almost one year ago from cancer. This picture was taken in 2008 and using it to attack CNN is disrespectful to me, my son and our family….1 of 2

“No one has to lie to make you or @realDonaldTrump look bad,” she continued, speaking to Trump Jr. “You easily do that on your own. Don’t use images of this man who was loved by many and is missed by even more.”

Trump Jr. is yet to retract his tweet or issue a statement acknowledging Thomas or the falsehood of his claim.

In a segment on his show on Monday, Cooper responded to Trump Jr.’s suggestion that either he or the network had somehow faked coverage, calling the tweet “idiotic.” In his closing argument he acknowledged and paid tribute to his former colleague.