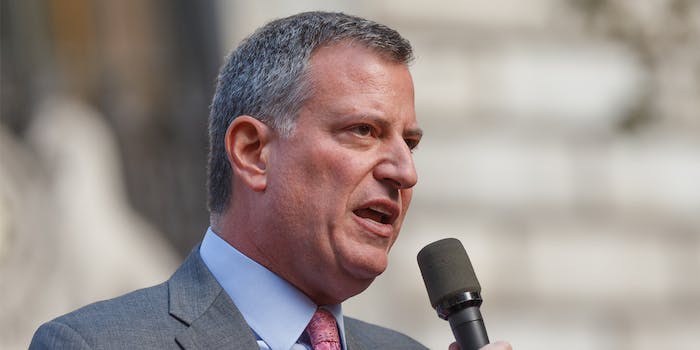 New York City, the region hardest-hit by the coronavirus in America, is possibly seeing some light at the end of the tunnel, as overall hospitalizations have finally started to tick down.

But the city is still bracing for a summer-wide shutdown the likes of which have never been seen before.

In the face of this, Mayor Bill de Blasio tried to give an optimistic tilt to his daily press conference today, declaring that when this was over, New York City would give its healthcare workers and first responders the biggest ticker-tape parade ever.

(The city is known for honoring sports teams, military heroes, and astronauts with parades down lower Manhattan where they are showered with bits of paper.)

Of course (well, likely), the mayor wouldn’t schedule any parade until the all-clear was given for the health of all attendees.

But seeing that coronavirus was wildly spread by numerous large gatherings across the world, the idea was met with a mass face-palming online.

Also referenced was an infamous parade in Philadelphia in 1918, which helped supercharge the spread of the Spanish Flu.

Many just called for increased hazard pay for doctors. Because at a time when budgets are being slashed, this doesn’t seem like the best way to allocate resources, they argued.

If New Yorkers do have a parade, it will likely won’t be for over a year from now.