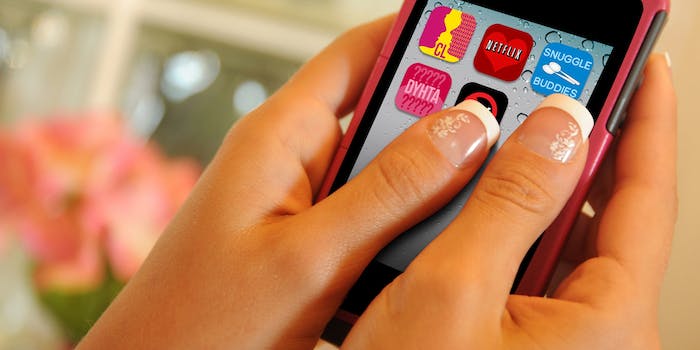 If you build it, they will come.

There are a lot of dating apps. If nothing else convinces you of the sheer diversity and big business of this industry, allow me to reference the fact that FarmersOnly (a dating site for farmers, only) is quite successful.

Digital daters cannot be stopped. There is no network is too niche, no app too sleazy.

I am a fan of both money and technology that promises everlasting love (or sexting), so I’ve come up with a few dating app ideas that really… should already exist by now.

I can be reached via Gmail or BBM for collaboration on any/all of these ideas. I can also be bribed with money and/or Chipotle gift cards to surrender my creative property.

This app is like the Hot or Not dating app except without the “not.” It’s more like Hot or GO HOME YOU UGLY.

I understand that’s a bit harsh, but these are the times we live in and I truly believe this to be one of my more marketable ideas (which makes it neither good nor helpful).

Here’s how it works: You login with your social network of choice. Then you choose a photo of a celebrity you find sexually appealing; you also have the option of uploading your own. The app finds the closest thing to him or her within your social circle (which, obviously, includes friends of friends, and maybe even friends of friends of friends… because let’s be honest, we need to cast a wide net with this one).

Credit for this idea goes to Natt Garun, who wisely suggested it during our Sex/Tech Hangout. It is brilliant, and necessary. There is not one among us who can’t understand the frustration and utter obsession of the Netflix queue. Even when the recommendations are utter crap (why would watching Blackfish mean I would want to see The Bling Ring?), the system therein is something we rely upon, and regardless of Netflix’s missteps, it holds perhaps some of the most revealing data about us.

And if you use Facebook to log in, then it also has your profile picture/sex/location/general interests/etc. But I’d argue that even without that, having access to our binge-watching habits, the movies we keep returning to, and the hours upon which we are streaming would all be some great matchmaking material. Because really, if we’re going to make it, you’re going to need to indulge a once-a-year tear through Firefly, and when I’m feeling sorta meh, we’re going to watch a few episodes of 30 Rock.

People keep applying this concept to music-streaming services like Pandora and Spotify, but I would argue that many of us don’t actually want to sit around and listen to music with bang buddies/significant others. After a date/long day at work/having sex, I would much rather watch an hour of Parks and Rec or get way too into a documentary about the Aryan brotherhood.

The fact that “hookup app” is a recognizable genre of dating service means we have plenty of them. So, cool, we got that covered. But what if you’re not ready for full pene-traysh? Clearly the immense variety of sexy time apps means we appreciate being direct about our intentions, bedroom and otherwise, so perhaps we need an app for those seeking some weeknight-wine-followed-by-spooning sessions, minus sexpectations. Other activities would include Sunday brunch followed by spooning, reading in the park in cuddled positions, holding you till you fall asleep, and trips to Target that originate out of needing a new hamper but are largely spent “just looking.”

The crux is intimacy without ultimate physical commitment; it’s for loners who enjoy the quiet companionship of steady relationships, but not all of the sexual and emotional ties that come with them. It’s for people who like the monotonous stage of auto-hugging your significant other when you get home, but who’d like to skip the anxiety of getting to that point, and the risk of wholly throwing themselves into the later stages.

This is starting to sound a lot like the Netflix dating app. Also, if you can’t find anyone who wants this, you can just pay someone.

The “do you have that app?” dating app

I hate to suggest this idea because I know I am going to get yelled at for it by everyone who believes technology is sending us to hell in a handbasket, but I don’t care! This app is incredibly simple, and perhaps the most revealing and honest of any of these.

You take a screenshot of your phone’s homepage, pointedly the dock or location that indicates your most used apps. You upload this, and you are matched based on this alone. If you want to pay for premium, the app will dig further into your app use.

Honestly, if you don’t have Dots, there’s no future for us. I will have nothing to talk to you about on date two and you’ll get bummed out by insistent requests at challenges. On the flipside, if there is a heterosexual male who has the Lisa Frank app downloaded, we need to know each other.

I’m not sure if the technology is available for something like this yet, but if it’s not, “they” (you know “they,” right?) should build it. To use this app, you log in with Facebook (because it will need the network with the most personal history). Then you go through your friends list and pick everyone you’ve ever dated or hooked up with, and there’s an option to offer a brief explanation of why it didn’t work out. Things like “commitment issues,” “is a Republican,” and “hates cats” are worthy commentary here.

The app scans this information, and finds you someone within your online social circle who won’t read your texts over your shoulder, untag themselves in all your photos, or complain about going to the odd happy hour with your improv group. By looking through tagged photos, status updates, and their own relationship histories (as well as what their exes who use the app have written) it can spit out the people with the best ROI odds for you.

Yes, this sounds a lot like Lulu, but it’s not gender-biased and it doesn’t only take exes’ notes into account; it’s also using “Facebook proof” to offer you some conclusions. Science. Science.

Photo via Wonderlane/Flickr (CC BY 2.0) | Remix by Jason Reed