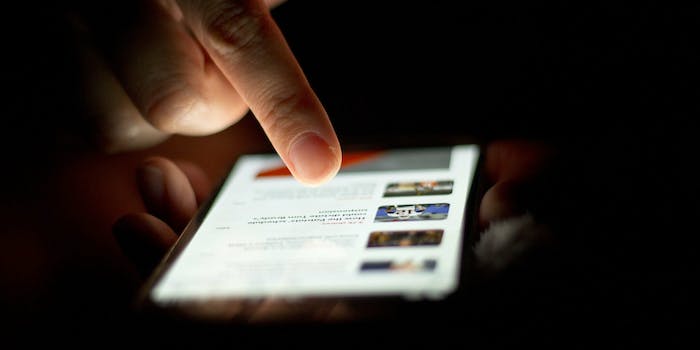 Photo via Japanexperterna.se/Flickr (CC BY 2.0)

The global impact of HIV and AIDS has been on the decline for the better part of a decade, but a new report suggests that it may be on the rise again. One of the causes for the sudden increase may be sitting on your phone.

According to Unicef’s latest report, “Adolescents Under the Radar,” dating apps are at least in part to blame for a growing rate of infection—particularly among young gay and bisexual men.

Centers for Disease Control and Prevention numbers show the group is more severely affected by HIV and AIDS than any other, accounting for 72 percent of new infections in the United States. Unicef focuses its research in Asia and the Pacific, but resulted in similar findings: Young people are at a distinct risk due to neglected education efforts, and it has resulted in rising infections among young people ages 10-19.

Dating apps drew particular attention in the potential rise. As Unicef noted in its report: “The explosion of smart phone gay dating apps has expanded the options for casual spontaneous sex as never before.”

This argument has been invoked before with regard to dating apps and a rise in the amount of sexually transmitted diseases. The British Association for Sexual Health and HIV and the U.S. AIDS Healthcare Foundation (AHF) both pointed their fingers at Tinder and similar apps for an increase in cases of chlamydia, gonorrhea, and syphilis—though the science on those reports has been called into question.

The AHF has even gone as far as placing a billboard suggesting a direct link between dating apps and the spread of STDs near Tinder headquarters, while also promoting the organization’s FreeSTDcheck.org initiative.

Unicef doesn’t so much blame Tinder and its family tree of casual dating apps as it does suggest those services could be more proactive to combat the AIDS epidemic. “Popular smart phone dating apps in the region such as Jack’d, Blued and Grindr, while enabling a generation of MSM [men who have sex with men] to meet sexual partners easily, could also be educative,” the report states.

These types of programs have started to pop up in various dating apps. Hornet and Jack’d deployed awareness campaigns in regions with less public discussion about the risks that lead to the virus. Grindr, one of the apps most used by men who have sex with men worldwide, has also worked with public health organizations, health clinics, and advocacy groups to increase awareness of sexual health issues. Unicef has worked directly with Blued, a popular app in China, to display red ribbons on user profile pictures and provide information on where to get an HIV test.

Dating apps offer an important platform to create awareness due to their reach and the constant role in the life of their users, but proper education from health professionals is also paramount. In a survey conducted by Grindr earlier this year, the app found that nine out of 10 gay and bisexual men have never had a conversation with their doctors about PrEP, the top method for preventing HIV transmission. The medication lowers the risk of contraction by 92 percent.

In some countries, there are hurdles to even get to the doctor. Discrimination against those with the virus has also presented a considerable problem. Unicef found that societal stigma presents a considerable obstacle that prevents many adolescents from visiting health clinics for HIV testing and HIV-related services.

The organization also found discriminatory attitudes in schools against young people living with HIV is still common due to unfounded fears and myths about transmission. In China, 36 percent of children living with HIV were discriminated against in an educational setting—nearly 30 percent in the Philippines and 22 percent in Thailand experienced the same.

According to the World Health Organization, 1.5 million people died from HIV globally in 2013. Unicef is aiming to raise testing rates for HIV to 90 percent for at-risk groups—a goal that will take a significant effort in some regions where testing rates are below 10 percent—as well as reduce infections among adolescents by at least 75 percent and deaths by 65 percent by 2020.