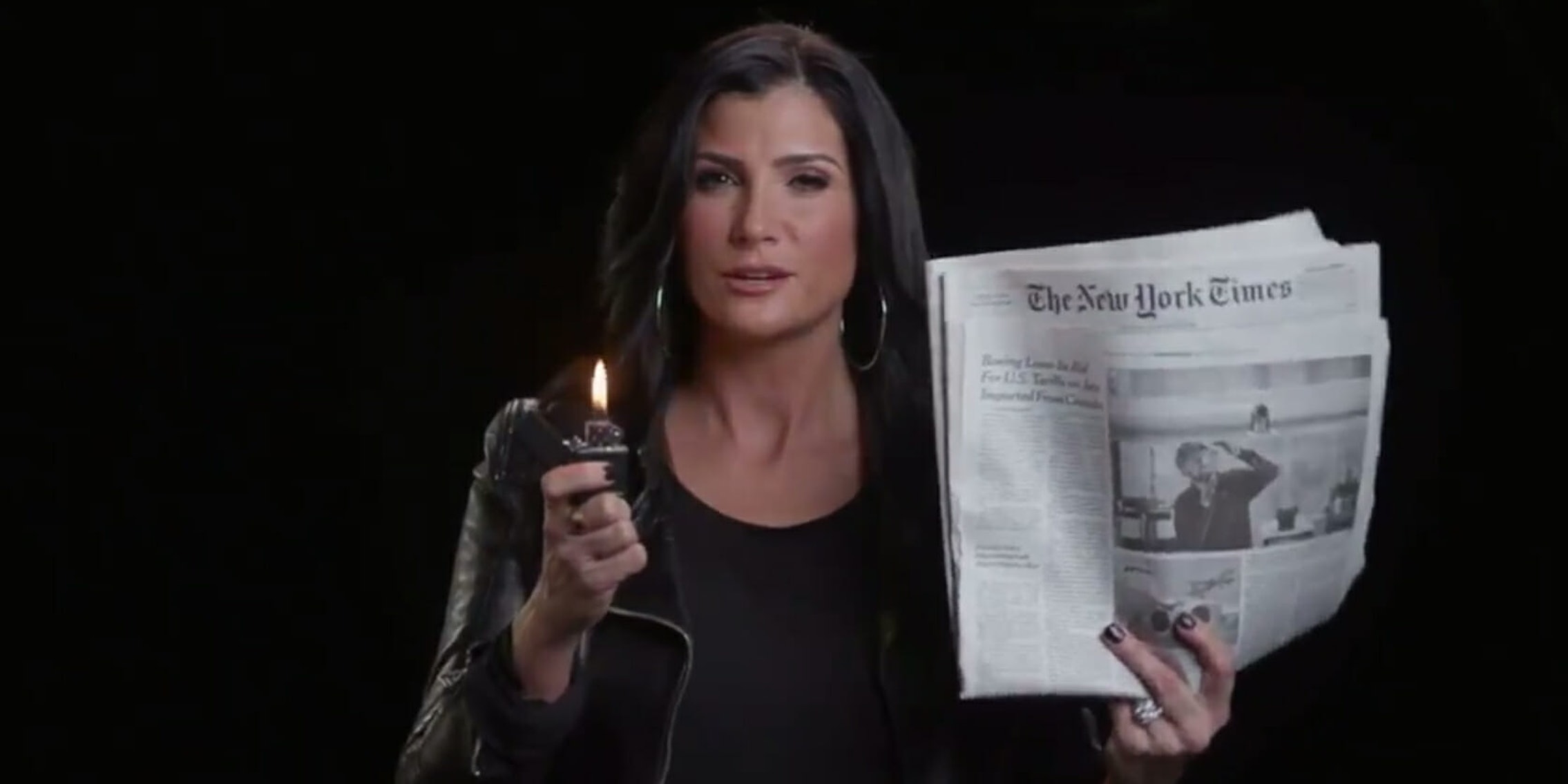 As a gun-touting, hard-right conservative, she’s proclaimed she wanted to “fisk” the newspaper for its “liberal bias” (although people thought she said “fist” which admittedly would have been funnier), and now she has threatened to burn the Times as part of an anti-media ad.

But just last month she was profiled by the paper, which some people have criticized as being a “lovely” article about her.

So yeah, there’s a lot of conflicting things going on here. Namely, a Second Amendment absolutist shitting all over the one that precedes it.

Loesch has been known to create provocative viral videos for the NRA, including one where she was accused of inciting a “civil war” because of the violent imagery and calls for arms.

So her latest NRA video published on Wednesday—where she holds a lighter up to the newspaper and the organization asks its followers to “fight their violence of lies with the fire of truth”–sparked some mockery from people given the latest profile.

“You know, I don’t even have to do this. You guys are doing a good enough job burning down your reputations all by yourselves,” Loesch says in the ad.

Fight their Violence of Lies, with the Fire of Truth. pic.twitter.com/u3gXml3tuF

The fact that Loesch threatened to burn the newspaper that just published a profile on her late last month was not lost on people.

Hey @DLoesch how does it work? Do you just assume the NRA members you are riling up won’t ever see the lovely profile you did with the same paper? pic.twitter.com/SKQ4yCYhu7

.@NRA lobbyist Dana Loesch burning a New York Times dated Jan 26. She hates their violence of lies so much she sat down for @nytimes interview published Jan 20: “The NRA’s Telegenic Warrior” https://t.co/AdTYFagF6t

Someone better put another log on the fire of truth. https://t.co/FxTPKJzoKv

Others just thought the ad was a vapid attempt to rile up the NRA’s supporters.

NRA, this is your dumbest tweet in a while. Speech is not violence. And to think you're a proponent of the 2nd amendment. Yeeeeeesh. Violence? My, my.. https://t.co/bPEMmQVI62

just giving up on the rifles part. https://t.co/qV5sVrZZaa

But Loesch didn’t go down without defending herself. Following the backlash to the ad, Loesch said Democrats were “mad” because she “invaded their safe space newspaper.” She also said she didn’t “hide from opposing views like anti-gun progressives.”

Progressives are mad tonight because I invaded their safe space newspaper and still have the audacity to criticize it. #ShePersisted