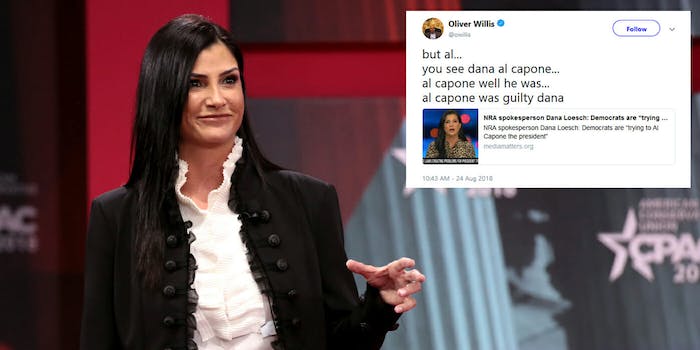 People had a lot to say.

She has been at the center of many NRA-sanctioned videos defending the president. But as several former officials linked to the president—former campaign chairman Paul Manafort and former lawyer Michael Cohen—went through legal battles this week, Loesch went on the offensive, claiming that Democrats were treating Trump like Al Capone: the infamous mobster.

As Media Matters for America pointed out, Loesch made the comparison earlier this week, addressing the campaign finance violations Cohen may have implicated Trump in during his guilty plea.

“The moral argument over the president’s infidelities would never result in legal trouble. So they believe they have to take a lesson from the Clinton years and find a way to make it a legal problem,” she said.  “And that’s exactly what they’re using campaign finance for, an already unconstitutional set of laws to pull it off.”

“They’re trying to Al Capone the president. I mean, you remember. Capone didn’t go down for murder. Elliot Ness didn’t put him in for murder. He went in for tax fraud. Prosecutors didn’t care how he went down as long as he went down. The same goes for Democrats. Whatever avenue is needed to bring down the president, they’ll take it.”

Loesch’s comparison between Trump and Capone did not go unnoticed by people on Twitter.

Loesch, seeing the pushback online, said she was referring to “how the original accusation wouldn’t match the charge” in response to someone highlighting the clip.

Trump, for his part, has no problem sounding like a mob boss, and again, Al Capone was very, very guilty, so… Read into it however you want.

You can see all of Media Matters’ report here.