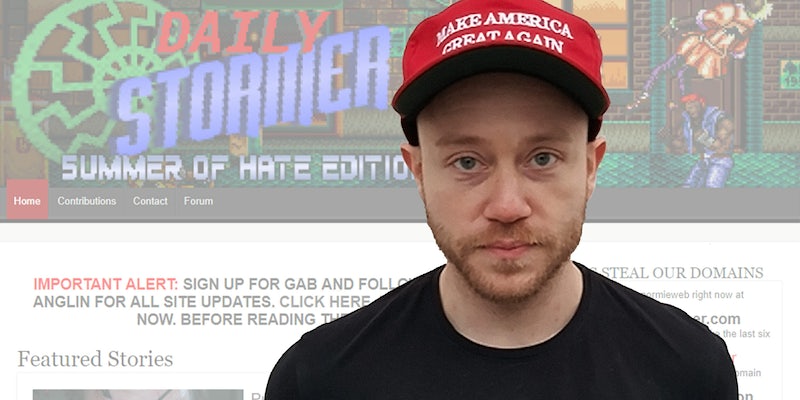 The neo-Nazi website has been denied a host by several companies.

Daily Stormer, the notorious neo-Nazi and white supremacist website, is back on the open web under a new domain name.

The website, known for its racist, homophobic, misogynistic, and anti-semitic content, was denied by several web hosting companies in recent weeks following its vulgar response to the violence that occurred in Charlottesville, Virginia, as a result of a group of white supremacists holding a rally in the college town.

Several hosting companies pulled the plug on the Daily Stormer, forcing it to go onto the dark web. It’s new domain, punishedstormer.com, popped up online on Thursday. However, as of Friday morning, the site is again offline.

According to the site’s WhoIs records, the punishedstormer.com domain is hosted by DreamHost.

DreamHost did not immediately return a request for comment by the Daily Dot. In response to a user on Twitter, DreamHost said it was investigating the issue.

We appreciate that this is a sensitive issue and are discussing and reviewing our policies internally. Thanks for speaking up. *MT

As Gizmodo reports, punishedstormer.com moved its registration back to GoDaddy, the very registrar that first dropped Daily Stormer after Charlottesville, sending it fleeing around the internet for a new home.

In a post on the Stormer’s website, the website’s creator, Andrew Anglin, posted a diatribe explaining how several internet hosting companies denied him service and lamenting what he sees as an affront to free speech.

“We are live on the real internet. For the time being,” Anglin wrote. “I don’t know how long this will last, but we’ll see. The company that is registering our domain could be the hero the internet has been waiting for.”

In the post, Anglin compares himself to Goldstein in the novel 1984 for being a “man who stood against the system.”

Anglin also addresses “new people” who are visiting the site and defends his beliefs.

“I am not actually a ‘Neo-Nazi White Supremacist,’” Anglin wrote. “I don’t even know what that is. The media, while using this term nonstop, has refused to provide any definition of what it actually means. And while I am allegedly the most popular ‘Neo-Nazi White Supremacist’ in all of history – and I am certainly the most punished – I do not personally know what it means.”

Anglin is directing readers to download the Tor Browser, which will allow them to access the site’s dark web version.

You can read more about Anglin at the Southern Poverty Law Center.

Update 7:17am CT, Aug. 25: The punishedstormer.com domain no longer works. The domain was forced off DreamHost and then moved to GoDaddy, which appears to have also dropped the domain yet again.