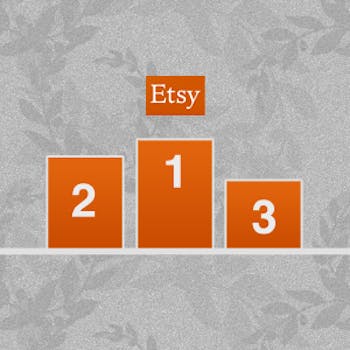 Meet the crafters who connected with the most buyers this year.

Since 2005, Etsy has made turning a hobby into a business easier than ever before. Today, the e-commerce site has more than seven million users who collectively do $314 million in sales.

Rattling off a list of Etsy’s top sellers is easy: We went to Craft Count, the same statistics site the Etsy community itself uses to keep track of which shops are in the lead, and found the 10 leaders. (We excluded sellers of craft supplies and vintage resellers, sticking strictly to purveyors of handmade goods, since they represent the heart of the Etsy community.) You can argue for other measures of influence, but ultimately, if people aren’t buying what you’re selling, you’re not living up to Etsy’s promise.

But numbers don’t tell the whole story: They leave out how Etsy’s leaders got to the top. Every store is different, but patterns readily emerge.

First, everybody loves a bargain. Affordable yet homey is a winning formula we see appear up and down the list. Second, it’s not enough to reach shoppers on Etsy; you need a blog, a Twitter account, a Facebook page to sustain a connection with your buyers. Lastly, charm and wit help clinch the sale. The Daily Dot’s top Etsy sellers have it in spades.

On a platform that is predominantly female, how did Vincent “Bean” Forest become Etsy’s top seller? It must be that the Grand Rapids, Michigan artist and blogger coins witty phrases that speak to the community’s psyche.

Forest creates buttons and pins with what he calls the Calamity Collective, a group that includes friends, family and a cat named Chupacabra. Pins may reference the wearer’s wit or geeky interests, but each and every item promotes the homespun whimsy that Etsy is known for.

A huge number of people must like to bathe with chocolate and beer, because this shop has sold similarly scented soaps by the thousand. Headed by Portland, Ore. resident Dennis Anderson, this family business crafts bath products by the batch.

Anderson founded the shop in 2007, but quit his job as a lawn care specialist a year later to sell on Etsy full time. The staff profiled him on how his store had become so successful, even then.

“Word of mouth is HUGE,” he told them.

Etsy’s company rhetoric sets up a dream scenario for potential sellers. “Sell with us, and soon you’ll be a creative force living life on your own terms!” Emily Winfield Martin of theblackapple is the living embodiment of that dream.

Martin works in her “tiny nook of a studio” in Portland, Oregon, blogging and crafting prints, books and paper dolls inspired by fairy tales and carnivals. In her free time, she enjoys hunting for treasure. It’s almost too much twee to believe, but Martin’s image is what makes the sales.

It takes a lot of work to become one of Etsy’s top sellers. There’s not just the crafting, but the packaging, mailing, customer service and promotion. Which is exactly why it’s so hard to believe that seller Molly Flatley has four children under the age of ten.

The Cary, North Carolina mom makes rubber stamps and lately, throw pillows to sell. On a typical day, she makes more than 20 sales. Flatley drives traffic on her Facebook page, where she offers a new coupon code or giveaway nearly every week.

When Ryan and Lucy of Berkley Illustration cleared over 1,000 sales after just two months of selling, Etsy’s official blog gushed, “This must be some kind of record!” Since the company doesn’t keep clear public records, this may very well be true.

The Portland pair sells hyperrealistic drawings of animals dressed to the nines, including a rabbit with a boutonnière and a gorilla in military garb. To complete the anthropomorphic charm, each and every portrait has an adorable back story. Who can resist a dapper sea otter that loves to sing and dance?

After five years of running a brick-and-mortar shop, Lori and Starbuck needed a change. They moved to Atlanta, Georgia and began selling their screen printed designs online instead. It was profitable enough for them to do full time.

“Etsy itself gives us a 24-hour worldwide audience that has taken us in a whole new direction,” the couple told the Etsy blog.

Now, the two spend their days with their children and their nights crafting. It’s paid off: they said their shirts have been featured in Time, NPR and The Daily Show, for starters.

Many shops sell soaps on Etsy, but it’s the unique scents that set Lisa and Mike’s apart from the rest. From Teardrops on the Fire to Coconut Mochi to Earl Grey Tea with Lemon Peel, the San Francisco seller’s products aren’t your average fragrances.

Featured on the Etsy blog in 2008 and 2011, Savor usually makes hundreds of sales over the holidays. However, this year Lisa’s emergency eye surgery has forced the couple to temporarily shut down shop. They’re using their Facebook page to keep fans and potential buyers posted.

This Bluffton, Indiana based shop has diversified the bath and body concept. Selling everything from shaving cream to shampoo and conditioner to deodorant to lip balm, Brian and Tina go beyond soap.

According to the Etsy blog, Brian and Tina may have broken a record in 2008 when they made 2,600 sales in six months. The couple’s advice to other sellers hoping for similar success?

“Keep focused, keep your goals in mind, and WORK SMART and HARD to get what you want,” they told the blog. “You will get out what you put into your Etsy experience.”

When this shop announces it’s “the #1 seller of children’s items on Etsy” on its storefront, it’s not empty boasting; it’s true. The shop, named for seller Kelly H.’s daughter, really does sell more flowery headbands and handknit hats for baby girls than any other shop.

The Castle Rock, Colo. mom has been selling hair accessories since 2009 and has a very active Facebook page and blog. With so many sales and giveaways, it’s a wonder that she makes any sale for its full price—but who doesn’t like a bargain?

Stefani McCune means her shop title literally. When she, an experienced jewelry maker, commissioned her artistic husband Mark to help her open up shop, the couple turned their whole home into an art studio. Now they sell affordable Scrabble tile necklace pendants while raising two daughters.

McCune, who was named one of Babble’s top 50 Etsy moms in 2010, sells pendants in every design from a cartoon ninja to Renaissance art to literary quotes. Perhaps the secret lies in her pricing: nothing costs more than $10.